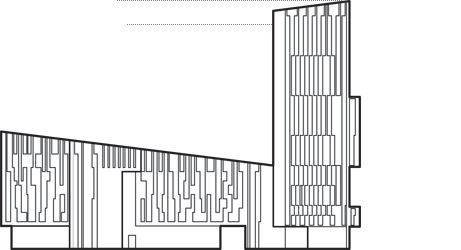 Broadcasting Place is a mixed-use development close to Leeds city center. Conceived as a public/private partnership for property group Downing and Leeds Metropolitan University, it provides new office and teaching spaces together with 240 student residences. A new Baptist Church completes the scheme on its northern edge.

A bold addition to the Leeds cityscape, Broadcasting Place forms a prominent marker at one of Leeds’ gateways. This new academic complex for Leeds Metropolitan University overcame difficult site challenges with a masterplan which manages an inner city motorway passing alongside while also enabling future growth. The site itself encompasses a rich history as the location of Old Broadcasting House, the old BBC TV Studios, and the place where the first moving picture was developed by Louis Le Prince in the late 19th century. It sets the ideal stage for an educational building dedicated to Leeds Met’s Faculty of Arts and Society.

The masterplan worked within the framework of the “Renaissance Leeds” documents which defined a “city rim” where physical and social connectivity were paramount in reintegrating the city center with its inner city surroundings. The building concept attempts a fusion between the geological, the sculptural and the cinematic to create a building that is firmly rooted in its city context. The building creates two rising forms that snake around the perimeter of the site, responding to existing building heights, culminating in a tower “head” at the south side of the site. This tower marks the south end of the site with a dramatic formed gable end that faces towards the city.

Extensive negotiations were undertaken with the City Planning Department and in particular their Conservation Department. English Heritage was also involved in these discussions and after some initial opposition to the proposals ultimately wrote in support of the design.

This is a key central Leeds location and a new public space linking key urban spaces forms a significant landscape element in the scheme. Broadcasting Place opens up pedestrian routes across the site that had been blocked by previous developments and re-connects Woodhouse Lane with Blenheim Walk.

A key element in the design of the buildings is the irregular elevations which have been tailored to optimize daylight and reduce solar penetration. The proportions of the glazed façade have been derived using special software. An innovative analysis of the building façades was undertaken, to calculate the optimum quantity and distribution of glazing/shading at all points on the façade in order to ensure high levels of natural day lighting but without overheating.

The buildings are conceived as solid landscape forms which draw on Yorkshire’s rich geological and sculptural heritage. The concept of a strong roof pitch is reflected in the massing of the buildings which have sharp triangular corners and angular cantilevered projections. Through this massive form, windows were conceived as the flow of water cascading through a rock formation. This design intent is reinforced by the selection of cor-ten steel for the façade, as a solid, sculptural and weathering material.

The tower sits high above the city center on a main ridge which focuses a number of the city’s taller buildings. The stepping mass of the tower front places the largest elements on the skyline and the smaller elements closer to the ground and human scale. This inversion of traditional stepped massing gives the tower a unique character that provides a new identity for Leeds Met University and Downing. The sculptural south elevation is free of windows reflecting the benefits of an east–west orientation for accommodation, while at the same time reinforcing the clarity of the sculpted form in the city.

The ascending scale of the grouped projections to the south is also reflected in the grouping of windows on the east and west elevations. Smaller shifts at the lower floors give the building a more intimate scale on the street, while larger groupings higher up are designed to be seen from long distances and deal with the city scale.

The environmental approach for the building combined several elements: the façade was designed to optimize cooling load and energy use through the rigorous research and development project involving 3D computer simulations of all façades, and the building’s form was designed to optimize natural daylight and allow for natural ventilation where practicable. The development was also designed on the premise of being a car-free environment conducive to pedestrian access and includes a bike parking provision. During detailed design the buildings were developed to suit the Leeds Met University’s specific needs for the various faculties, while not sacrificing future adaptability to ensure a long lifespan for the building.