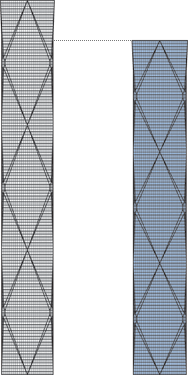 Located at a key site in Shenzhen’s central business district’s south east corner, Excellence Century Plaza is a dense, mixed-use project comprised of three office towers and one hotel tower. The towers spring from a four-story retail podium, which links the complex horizontally to adjacent streets at a human scale, and is supported by three subterranean levels of parking.

The four towers are designed as variations on a theme of metal and blue glass curtain walls, shaped as jeweled prisms carved slightly at their exterior and interior corners, orienting them both inward and outward. These prisms are articulated by polygonal forms creating series of large diamonds into which LED lights are integrated, accentuating the diagonal lines at night. The prism motif is also carried through to the building interiors where the lobby ceilings reflect the faceted design accentuated by clever lighting schemes. Tower 1 is the tallest of the four towers, conceived as first among equals in a harmonious grouping joined physically, functionally, and socially by the podium.