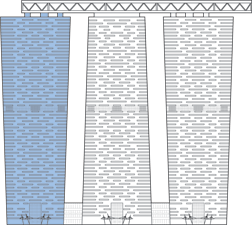 About The Gate Residential Tower 1

The Gate Towers consist of a series of towers that act as pillars beneath a curving lintel. This renders the effect of a monumental portal that defines the threshold to the Shams Abu Dhabi district, a newly-created land mass formed as an extension of the Central Business District on exposed tidal sands within a fringe of mangroves at approximately five to seven meters above sea level. The area is gradually developing at a high density and growing in prominence.

From a development standpoint, the concept was derived from two maxims: First, to make a statement of intent which is visible from the main part of the city; second, to form a gateway to the remaining sites within the Shams Abu Dhabi precinct on Reem Island.

This mixed-use residential project has a total of 3,533 luxury residential apartments in three towers of 66 stories, connected at their top with a two-level sky-bridge structure, which contains 21 large luxury penthouses. This composition is adjoined by a 22-story, horseshoe-shaped building. The complex includes three swimming pools and four water features, with car parking in 3 subterranean, one grade and three podium levels. The podium includes two levels of retail shopping mall space.

The Capping Bridge across the towers is an extraordinary achievement, involving precise calculation and steel fabrication. The two 750 metric-ton spans between the towers were fabricated on the ground and vertically strand-jacked into position 238 meters up -- the heaviest and highest lifts ever attempted for a real estate project. The cantilevered portion on the East Tower (tower 5) was an act of precision using smaller truss modules installed by a traveling gantry above.

The Dubai rope-access company Megarme installed an innovative system of tension cables to provide an underside working platform for installing soffit panels and abseiling (rappelling) hooks. Tension cables were strung between two towers at three-meter centers, with periodic connections into the structure above, and nylon nets were stretched between them. This was the fastest way to achieve a platform 230 meters in the air.

The Arc (Tower 7) has a hanging garden feature, which brings small secluded pockets of landscape up to the residential levels of the building. There are 14 hanging gardens in total, each accessible from the adjacent corridor with its own irrigation system, fountains and stepped seats.

Environmental effects such as air quality, ozone depletion and global warming were addressed in the design and were a guiding factor in the selection and installation of the mechanical and electrical equipment, which featured bi-polar filters and pre-cooling on the fresh air handling units, which improved indoor air quality and movement while controlling the temperature throughout the building.

The cooling provisions for the building are provided by a centralized district cooling plant, which serves all the towers and podium, reducing energy consumption compared to conventional systems of chillers installed individually on each of the towers.

Gate Towers Chosen as Featured Building
Dec 2013, Abu Dhabi – Featured Tall Building
The Gate Towers allude to a future in which tall buildings appear at such density that many of the amenities of urban habitat on the ground can and should be replicated at height.