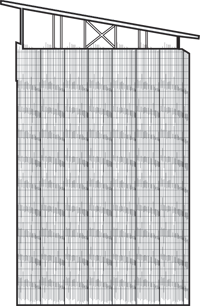 The Edith Green-Wendell Wyatt (EGWW) Federal Building is an office tower, completed in 1974. The building no longer met the functional or the energy and conservation requirements of the contemporary US government, so a major renovation project was undertaken. A mechanical upgrade, seismic retrofit, and full interior rehabilitation was paired with a full replacement of the building envelope with a distinctive shading facade, affording better energy performance and a new lease on life.

While investigating the brief, the architects discovered that the existing concrete skin of the structure covered up to 600 millimeters of floor area for every 300 lineal millimeters of exterior wall. By applying a new skin to the existing slab edges and making other changes related to HVAC systems, the design added 9,449 square meters of new rentable office space, which amortized the added cost of the envelope. About 650 square meters of that space was freed up by switching to water cooling, which reduced the building’s thermal load to the point that the large fans for the previous forced-air cooling system could be removed. Additionally, removing the concrete façade panels simplified the seismic retrofit of the building due to the reduction of weight; the new façade system could be attached to the structural frame with a series of relatively short steel beams.

Because of the importance daylighting plays in human health and comfort, the project optimized solar penetration in the perimeter zone by deploying a low-powered ambient lighting in concert with focused task lamps. This resulted in a 50-to-60 percent reduction in energy consumption for lighting, while providing occupants with a valuable connection to the outdoors. The depth and spacing of the shading devices were varied to arrive at the performance metrics the designers used to derive the building’s aesthetic expression.

In order to respond to the unique solar exposure of the site, each face of the building was designed to both shade direct solar gain and reflect light into the interior spaces to enhance day-lighting. The result was a building that presents a different face to each solar circumstance. The reed-like shades affixed to the sides of the building are tuned for each facade to reduce solar gain, and a 3,962 square-meter roof canopy supports a 180 kW photovoltaic array, while also collecting rainwater.

Greater than 65 percent water savings will be achieved through a dual strategy of incorporating-water conserving plumbing fixtures together with a rainwater system. The water conservation strategy started with an analysis of how the existing building used water. Eighty-seven percent of the building’s water usage is for domestic uses, with 13 percent used for irrigation of surrounding vegetation. Because of this large interior use, the strategy focused on reusing rainwater for non-potable flush fixture uses first. Landscape water use is reduced by over 50 percent as well, through use of drought-resistant landscaping and incorporation of subsurface irrigation.

A 624,593-liter tank, created by repurposing an old rifle range, allows rainwater to be stored and used for toilet flushing, irrigation, and mechanical cooling tower makeup water. The tank also supports another project goal: mitigating the negative effects of urban runoff. Ultimately, the EGWW building is expected to save over 7.5 million liters of water annually – enough water to fill 22 swimming pools.

EGWW is designed to achieve a 60 percent reduction in energy use compared to the existing building, and a reduction of Energy Use Intensity (EUI) by 45 percent. A large portion of those savings will come from having eliminated forced-air fans.

These savings are the result of an integrated design process that prioritized comfort for the occupants and energy performance. Exterior shading, tuned by facade orientation, provides solar control while enhancing daylighting, thereby minimizing cooling load and peak electric load, and improving thermal comfort. These integrated strategies allowed the prime energy conservation measure, a radiant ceiling heating and cooling system, to be realized. Additionally, the building program was tuned to optimize performance with an ideal plan optimized at 70 percent open offices and 30 percent closed offices, provided for each agency. Common areas were moved toward windows, and interior walls were changed to glass to admit more light.