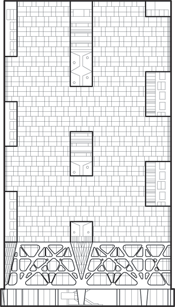 This project involves the construction of a tower whose lower levels are composed of commercial, cultural, and community spaces and whose upper floors, from the 5th to 27th, are officetels, which are residences that could also be used as offices during the day. To ensure the maximum building footprint ratio (40%) as well as optimal natural light conditions (southern exposure), a “C”-shaped plan is extruded into a 27-story tower consistent with the Domino Matrix to reach a height of 100 meters (328ft), the maximum height allowed by law. If this plan with a maximum footprint ratio had been simply repeated vertically, the total floor space would have exceeded the legally allowed amount by approximately 10%. To reduce this mass then, missing matrices are introduced to meet the maximum floor area ratio throughout the building, with a pattern of carved out space.

These 15 “missing” spaces allow the building to gain more exterior surfaces and corners for enhanced lighting and viewing conditions. The spaces created by missing matrices are landscaped with trees that are visible from the inside and outside of the building. Inside the tower a total of 49 different types of units, 172 units in total, are arranged heterogeneously to reflect/exploit the rich spatial conditions. For example, in the area created by the 15 missing matrices, there are 40 units with bridges that split public (living/dining area) and private spaces (bedroom) within the individual units, along with 22 units which have gardens. In addition, protruding spiral staircases are included within the missing matrices, further adding to the vibrancy of the program. The roof is another garden, private to the residents only. Similar to the second, third, and fourth floors, a trussed bridge connects the opposite ends to allow for spectacular views.

On the ground floor, the building opens up and connects to its surroundings with its urban park. The sidewalks are spacious at 9 meters (30ft) from its southern end, 10 meters (33ft) from the west, and 6 meters (20ft) from the east, allowing for small gardens and benches to provide a space of rest. The tall spaces of the first floor are occupied by retail stores and coffee shops alike, and they further encourage the use and the livelihood of this exterior space. At either end of this “U”-shaped floor plan are the lobbies for the residents, which are also strategically placed to be the closest from the parking drop-off zone. The center of the building front opens up to elevators and escalators connecting to the cultural functions below and more retail stores above, as well as a small pocket park in the center of the site, to be appropriated as a cozy enclosure to pause in the midst of this metropolis.

The second and third floors are composed of luxury retail shops. Along with the fourth floor, a glass bridge with a bamboo garden on both sides spans 20 meters (66ft) to complete the “U”-shaped floor plan into a full loop, enhancing its spatial functionality by completing the floor’s circulation.

The fourth floor has community facilities for the residents of the building. A bar/lounge space with the possibility of meetings and gatherings is placed in the center, with a business center, conference room, and two guest rooms branching out to the east, and a fitness center, locker room, shower facilities, and a maintenance office to the west.