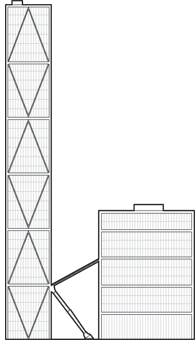 About The Broadgate Tower

The Broadgate Tower is the first developer-led speculative office tower to be built in the City of London and is part of the latest addition to the Broadgate development in the City. The building creates a landmark for the northern gateway to the City and offers high quality office accommodation at an important location close to the key transportation hub at of Liverpool Street Station.

The Broadgate Tower, along with its neighbor, 201 Bishopsgate, occupies a newly created air rights site above the active rail tracks that service Liverpool Street station. The massing of the overall development was informed both by the structural complexities of the raft on which it is constructed, and by the height restrictions that affect the majority of the site.

The eastern portion of the site lies within a viewing corridor which protects views of St. Paul’s Cathedral from King Henry’s Mound. Development of the majority of the site was thus limited to 13-stories, except for a small area at the northwest corner of the site that lies outside of this view corridor. This enabled the design team to develop a solution whereby a separate tower building could be constructed on the western edge of the site, facilitating the inclusion of a public galleria between The Broadgate Tower and 201 Bishopsgate without reducing the overall density of the development. The vertical massing of The Broadgate Tower enabled almost one third of the site to be dedicated to public space. The tower solution was also in line with changes in the office market leasing conditions, with a desire for views and with increased concern for sustainability, as smaller floor plates allow greater use of natural light.

The existing raft that formed the site had been designed and constructed years earlier to support a 13-story building in response to the restrictions imposed by the view corridor and to previous market conditions which required large floor plates for trading activities. However, as the building designs for the site evolved, it became necessary to plan raft modifications to facilitate construction of a different building tower. The western edge of the area available for the tower fell beyond the boundary of the rail tracks, thus allowing for additional foundations to be constructed to help support the increased load of a tall structure and its related cores. The eastern boundary was more problematic, as it fell on the mid-span of the existing raft structure. The design team responded by adopting a light weight steel framing system and a unique “A-frame” support which allowed the loads of the east wall of the tower to be transferred directly to the existing foundation system either side of the rail lines and avoid overstressing the existing raft structure.

The tower’s placement, floor plate width and height were directly related to the necessary balancing of the new loading criteria of a tall building with the loading patterns available in the existing raft and foundation design. The resulting design minimized the need for additional piles, and made full use of the existing raft structure with the need for only minor modifications.

The internal layout of the building was also influenced by the existing raft conditions and site constraints. The small floor plates of the tower meant that lift cores areas needed to be kept to a minimum. Double deck lifts were thus employed to achieve this, but as the raft structure was not deep enough to accommodate lift pits, the design team developed a multi-story lobby arrangement within the 5-story high lobby space that results from the “A-frame” structure. From entry level, escalators transport people to first and second floor lift lobbies from where they can use either high-rise or low-rise double deck lift banks to reach their destination.

The Broadgate Tower’s striking structural form, which is expressed by its major façades, is of a similar architectural vernacular to Exchange House, which is located on the opposite side of Primrose Street. The perimeter steel structure and related wind bracing are reflected in the exterior façade through a unitized stainless steel cladding of beams, columns and bracings. These cladding panels typically measure 13 meters (43ft) in length to replicate the appearance of an exposed stainless steel structure. Unitized aluminum frames and monolithic high performance insulated window panels, measuring 1.5 meters (5ft) in width and one-story in height (4.15m/13.6ft), complete the exterior façade. To the east of the tower, the “A-frame” support columns and their bracing are left exposed and clad in stainless steel as an architectural feature of the building. The “A-frame” support columns also form the skeleton of a new pedestrian galleria between The Broadgate Tower and 201 Bishopsgate.

The outdoor galleria creates a new pedestrian route across the site, which is sheltered by a five-story high glass canopy that is suspended from the tower. The galleria landscaping provides quality urban spaces and amenities for shops and outdoor dining. Twenty-three silver maple trees planted inside and outside the galleria will enhance the space, making it an even more appealing venue in which to relax. Up to 13 meters (43ft) tall, these trees sit in special grated pits sunk into the surface of the galleria. A “green” wall to the southwest of the plaza screens the three-story wall of the adjacent Broadwalk House.

A strong focus on integrating sustainable features throughout the design and construction of The Broadgate Tower has resulted in a highly efficient building without compromising operational performance. To reduce energy consumption, several provisions were incorporated into the design, such as: water cooled chillers with centrifugal variable speed drives and associated cooling towers for heat rejection; high efficiency chillers with a low turn down ratio to enable benefits of chillers to be passed onto the tenants in all operating conditions; heat recovery from office ventilation plant using thermal wheels, taking advantage of the heat gains in the office space and reducing the requirement for heating air from the outside; variable speed drives fitted to all pumps and fans;fan coil units fitted with EDC motors and providing variable speed control matched to cooling load; office lighting to have dimming, presence and daylight control; energy metering of chilled water, hot water and electrical services to each floor; and a comprehensive building management and monitoring system.

A building user guide is provided to ensure that occupiers operate in the building as efficiently as envisaged. Features such as local lighting zones, water metering and electricity sub-metering allow occupiers to take control of their own work environments.

The development marks a new era for Broadgate, creating an important addition to London’s skyline. Flexible and efficient occupier space, combined with high-caliber public spaces, offer a welcome expansion to the flourishing district. The Broadgate Tower provides an innovative and elegant response to complex site constraints while delivering buildings that reflect the commitment of both client and architect to a sustainable and environmentally sound future.

The Broadgate Tower Chosen as Featured Building
Jun 2013, London – Featured Tall Building
The dramatic and highly visible structural system employed on Broadgate Tower is an innovative solution to the challenge of spanning the pre-existing railways that run under the site.

Videos Related to The Broadgate Tower

Videos Related to The Broadgate Tower