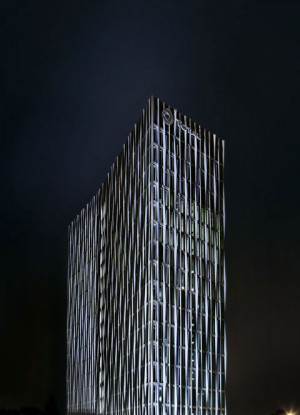 Set into Europacity, a master plan for a new urban district of 40 hectares directly to the north of the main train station in Berlin, Tour Total is the headquarters for the French energy company Total and is the first building in this plan. It is a freestanding high-rise that gives the company and its 500 employees a clear identity for their headquarters in Germany.

The freestanding tower defines a pedestrian passage on the west that leads to a new public space with restaurants and other amenities, located between the new tower and a planned adjacent urban block.

The building acts as a pilot project for Europacity, and serves as an example, setting the tone aesthetically and sustainably for future construction within the plan. Tour Total demonstrates how a master plan can adapt and change to the specific requirements of individual clients. While conforming to the intention of the master plan, it also provokes and pushes back against it. This is also significant in the overall context of Berlin.

Tour Total combines a Berlin typology - the “raster façade” or façade-grid - with ambitions for sustainable energy use, which was a primary goal for the tenant. This is consistent with an idea of combining formal / aesthetic ambitions for the building with performative / functional ambitions, wherein both are integrated. Sustainability is not a project “add-on.”

The raster façade is a sculpturally folded curtain, which wraps the volume, giving the building a dynamic effect in changing conditions of light and shadow. Historic Berlin facades typically operate with a material depth by which a façade may appear opaque from an oblique view and transparent from the front. Tour Total subverts this typology by creating a rippling visual effect through the precast facade elements. This effect is pronounced by oblique natural daylight and by electric lighting at night.

The volume of the building generates well-lit and ventilated office floors. Every second window is operable to a safe opening distance, allowing natural ventilation. The form of the building reacts to a number of existing urban conditions. Its front is oriented to Heidestrasse and to the planned future park to the north. The overall form then folds, creating concave and convex sides, reacting to both the orthogonal edge of the Heidestrasse and to the radial system generated by the curving Minna-Cauer Strasse. A two-story arcade, defined by columns, wraps the building base, with closed and open arcades for the main entrance and a pedestrian path to the north. The arcade acts as a filter between the lobby and the exterior, and as a scaling device for the overall building.

The DGNB (German Sustainable Building) Silver Certificate was an early goal and guided the design. Much of this was achieved through an intelligent facade system and energy re-use. The raster façade is a load-bearing precast concrete frame that eliminates interior columns, allowing floor-to-ceiling triple-glazed windows, and generating more usable floor area. The precast façade generates a ratio of 60 percent glazed to 40 percent closed surfaces, improving insulation values. This deep façade protects from direct sunlight and also provides a pocket depth in which to integrate retractable louvers for additional sun control.

Heating and cooling systems are integrated into suspended ceiling panels, which is more efficient than floor-based systems. Precast concrete has the added advantage of being a fireproof building material, eliminating the need for additional fire protection. This also means that the building requires only a single exit stair with baffle and sprinklers, generating additional usable floor area.

Total was determined to express the ambition of sustainability and to achieve an appealing office space. The building is configured to provide flexible workspaces of a floor-plate depth that can be both naturally lit and ventilated. The building as a freestanding tower offers complex views and orientations from all sides. The ground floor consists of an entrance lobby and bistro opening out to the pedestrian passage generated by the scheme for usable exterior space, opening the building up to the city and emerging community.