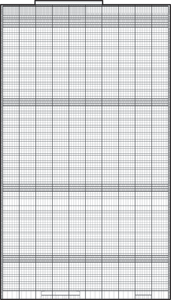 The Secretariat tower is arguably the most visible representation of postwar optimism and resiliency on the United Nations campus. It also embodies a mid-century Modernist merging of technology and form, as expressed in the remarkably slim north-south facing profiles and the crystalline east-west elevations.

When the multi-billion dollar renovation of the UN campus started, the Secretariat, which has never ceased to operate as a functional government building, was plagued by severely outdated fixtures, deficient life safety features, and a leaky curtain wall. It is estimated that the historic building had operated at least 35 years past its normal lifespan.

Key design strategies for increasing performance included the extensive redevelopment of the base building core and systems, including new elevator systems and mechanical infrastructure, new fire protection systems and code upgrades, disabled-access compliance, and asbestos abatement. Floor plate utilization was enhanced through the introduction of a new planning diagram. It also involved installing a better, more efficient envelope for insulation and blast protection.

The Secretariat was the first tall building to employ a suspended wall system. Its primary elevations were enclosed by free-hanging glazed facades. The new curtain wall was designed to look like it did when it first opened—sleek and taut, with its double-hung aluminum windows, glazed spandrel panels, and aluminum-clad steel mullions appearing as one continuous transparent form. The replaced wall’s appearance had been significantly altered after nearly 60 years of patches, caulkings, insulating and blast coatings, resulting in a patchwork appearance and a greenish hue.

To rectify this, the project team conducted extensive testing to replicate the visual appearance of the original building, including reflection patterns at different times of day. The work included spectral analysis of glass types to identify viable formulas, computer model simulation, and, ultimately, a full-scale mockup tested on the UN grounds.

The original curtain wall was demolished and replaced with a pressure-equalized system in sections, proceeding from bottom to top in each 10-story zone between the louvered mechanical levels. Unlike the original curtain wall, which had been attached to the concrete floor slabs, the new system is connected to the now-reinforced building frame via outrigger plates. To mimic the appearance of the original double-hung windows, the team strategically offset some of the aluminum extrusions. The new cladding incorporates performance enhancements, such as low-E coating and blast protection.

The new open floor plan challenges the closed culture propagated by the original cellular offices. Significantly more light and air now enter the interior. The open plan also affords more flexibility and efficient use of space in a rapidly growing organization; the Secretariat now serves 193 member-states, as compared to the original 50.

The open-plan daylighting scheme includes 1,981-millimeter-tall furniture-work walls that extend from perimeter columns, without blocking natural light. The ceiling is 2.4 meters high but gradually steps up to 2.9 meters at the windows, allowing for a circulation path around the core, while supporting the equitable distribution of mechanical services. Seventy-five percent of workspaces now have daylighting and views.

Overall, the resulting building is 50 percent more energy-efficient than it was before the renovation. Replacement was never an option due to the iconic nature of the tower; instead, the classic building was thoroughly renovated in place. In many ways, the Secretariat’s radical revitalization is more about rebirth than restoration.