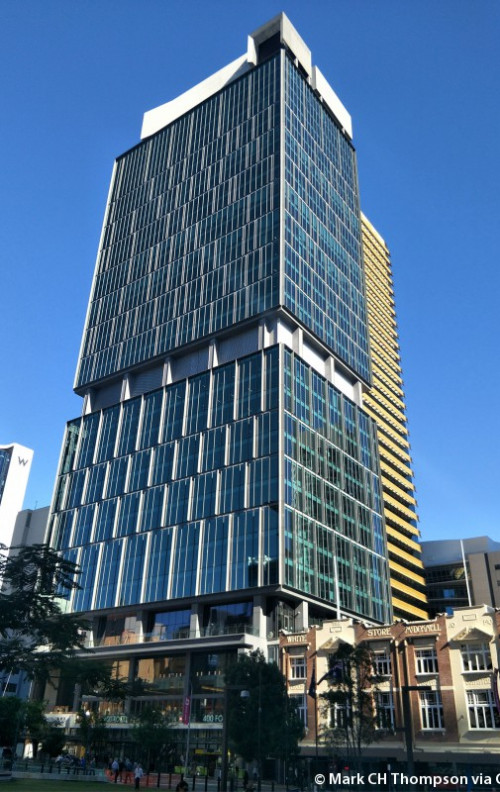 Recognizing that cities are dominated by office buildings in which corporate foyers, of limited public value or interest, consume much of the urban ground plane, this project shifts the typology of office towers from corporate institutions to public realms. In 400 George Street, the visitor experience is one of entering an “urban room”, a retreat from the city immersed in art. The space reveals the greater public invitation of accessible facilities, particularly an elevated food hall extending along and cantilevering over the entire George Street frontage, but also a full-time child care center and a series of social spaces.

The architectural form directly reinforces this ethos, sculpturally reaching out to the streetscapes at the base, and rising through increasingly calmer segments to the rooftop garden. These segments modulate the façades while responding environmentally to the tower’s climatic context, the responses and innovations being principal reasons for the selection of 400 George Street as the new home of the Queensland Government’s Department of Environment and Natural Resources.

Through the tower, 400 George Street comprises significant combined innovations including a high performance glass panel façade system which is subtly modulated and subdued given the historic context of George Street, Brisbane. A key environmental innovation was the combination of the condensate recovery and condensate pump energy optimization systems. These optimization systems have been calculated to save 700,000 liters of water, 110,000 kwh of electrical energy and 100,000 kg of C02 over conventional towers of comparable size. The condensate recovery system harvests water from the air handling units, while the condensate pump energy optimization controls the flow rate of condenser water through the chillers.

400 George Street illustrates how an office tower can contribute harmoniously to the high-rise context of the city without demanding visual attention, at the same time offering radical revision of the physical and social contribution that towers can make to the vitality of a city.