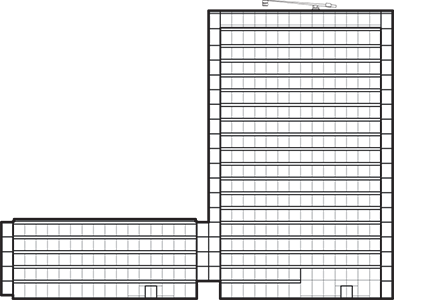 Simplicity of form and selective use of materials emphasizes the fundamental design idea behind the building—to formulate a clear statement of modernism. The building’s components, structure and envelope, as well as the users and their activities within, are clearly legible through the transparent façades. The south west facing façade expands beyond the building volume vertically and horizontally. The screens form one continuous glass sheet along the forecourt, connecting both the low and high building components into one.

The tower is constructed as a concrete frame with stiffening core and perimeter columns. Structure and façade are designed for flexibility in office layouts and allow for an open plan or cellular offices as well as multiple tenants per floor. The raised floor provides the opportunity to revise electrical and data caballing systems as technology progresses. Lightweight partition systems allow fast and inexpensive adaptation of changing space requirements. The use of a single secured stair as escape route for the users improves an economy to the building with its relatively small floor plate.

The interaction between all heating, ventilation and cooling components and their joint reaction to the exterior condition forms a complex and efficient system. Fan assisted heating and cooling convectors receive fresh air supply through the façade and bring in conditioned air directly without detour through centralized units. Heat recovery is achieved by running the return air through a heat exchanger, transferring its energy to the medium water for the thermal mass system.

Natural ventilation is provided by hopper windows operated by chain motors and held by scissor hinges. This allows the user to utilize fresh air for cooling, improvement of air quality and the experience of a connection to the outside.

The flat concrete slab is equipped with PVC water tubes to cool and heat the exposed thermal mass of the structure. The mass absorbs heat during the day and is cooled off actively and passively during the night. 30% of the basic cooling is thus covered without the need of energy and space consuming air convection.

The façade module of 2.7m (8.9ft) generates a generous ambiance of space. A windproof, exterior automatic operable sunshade on the south west façade allows for reduction of solar loads along with automatic interior perforated louvers on the other three façades. The exterior sunshade is a retractable curtain of stainless steel bars. Either by sensors or the user’s command, the sunshade covers the entire façade reducing the solar load to a minimum while still providing a visual connection to the outside. The shading screen is highly wind resistant and has had its first large scale application in the Hegau Tower project.

While the façade is clearly a very strong element in the project, it does not just determine the visual appearance of the building, but importantly, it also forms the interface between its interior and the exterior in respect to thermal, acoustic and visual exchange. The basic design of the building’s façade consists of large sheets of high-performance insulated glass with a transparent appearance yet effective sun-shading values. This basic and economic principal is amended by flexible components which allow the envelope to react to the requirements of the inner and conditions of the outer environment.

The façade becomes an integral part of the structure and technology of the building and a direct expression of the economical and ecological goals set forth in its design. The building’s appearance consequently is in keeping with the urbanistic, aesthetic and technological relevance of the project for the city, region and the time of its inception.