Note: Only countries with at least two completions in 2015 are included in this chart. One tall building 200 m+ in height was also completed during 2015 in these countries: Australia, Azerbaijan, Bahrain, Canada, France, India, Italy, North Korea, Philippines, Saudi Arabia, Turkey, Vietnam.

For the eighth year running, China had the most 200-meter-plus completions with 62, representing 58% of the global 2015 total, but only marking a 2% increase over its previous record of 61 in 2014.

Jakarta, Indonesia had the highest 200-meter-plus completions of any city in 2015 with seven, while Nanjing, Nanning, and Shenzhen tied for second place with five each. The total height of the buildings completed in Jakarta is 1,588 meters.

The 106 buildings completed in 2015 beat every previous year on record, including the previous record high of 99 completions in 2014. This brings the total number of 200-meter-plus buildings in the world to 1,041, exceeding 1,000 for the first time in history and marking a 393% increase from the year 2000, when only 265 existed.

We currently project the completion of between 110 and 135 buildings of 200 meters' height or greater. Perhaps even more staggering is the fact that 18 to 27 of these buildings are expected to be in the supertall range. If true, 2016 alone would see the global total of supertalls increase by 18% to 27%. Unsurprisingly perhaps, the majority of these will be located in Asia and the Middle East.

Once again, Asia was a major driver of skyscraper completions in 2015, with 81 buildings representing 76% of the 106-building total.

The Middle East had nine completions in 2015, marking the first time since 2009 that the region had less than 10 200-meter-plus entries in a year.

Europe had a big year with eight completions, an annual record for the region, while Central America makes a notable appearance on the list with four.

In 2015, the functional split for tall building completions appears to have remained relatively unchanged from 2014. That being said, all-office completions have hit another all-time record, with 52 buildings (49% of the total). Mixed-use buildings have also achieved impressive numbers, with 30 (28% of the total). In terms of all-residential completions, there were 20 in 2015 – two more than in 2014, representing the same percentage of the total (19%) as last year.

In an interesting turn of events, 2015 saw a spike in the number of buildings completed with concrete structures – 52 out of 106 (49%). This is a dramatic increase over 2014, when only 39 out of 99 were completed (39% of total). Indeed, greater showings from Europe and Central America were the cause of this anomaly, as these regions have a greater tendency to build tall using this material. Equally interesting is the fact that 46 of the 48 composite completions were in Asia, where material availability, seismic requirements, and workforce specializations are such that composite solutions are often the most desirable. Compare this to Europe and Central America, where concrete is often preferred due to its widespread availability and low cost when compared to steel. All-steel towers were very scarce in 2015, with only three 200-meter-plus completions around the globe. One of these is J57, a tower in Changsha, China that was built by Broad Sustainable Building (BSB) in only 19 days thanks to a CTBUH Innovation Award-winning modular construction technique that the company hopes to employ on a 202-story building known as Sky City. 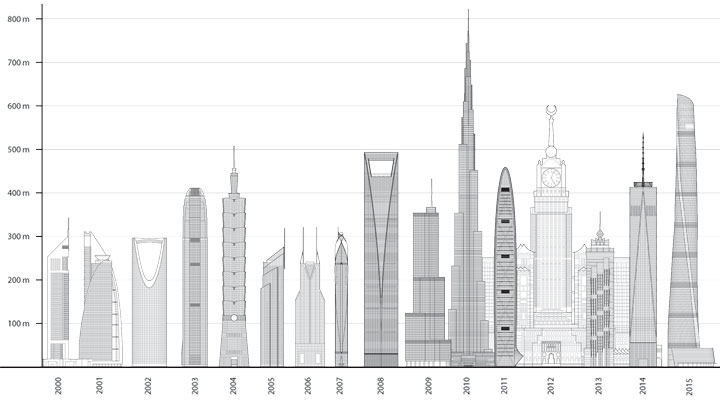 At 632 meters, <a href='https://skyscrapercenter.com/building/shanghai-tower/56' target='_blank'>Shanghai Tower</a> was the tallest building to complete in 2015 and is now the world’s second-tallest building.

All-steel continued its decline as a primary structural material, comprising only 3% of 2015’s 200-meter-plus completions and 11% of the world’s 100 tallest buildings.