Each year, the Council on Tall Buildings and Urban Habitat (CTBUH) publishes a study that examines all 200-meter-plus tall buildings that were completed during the preceding year. Click the tabs below to see charts related to each topic. The charts and descriptions are interactive. You can click on them to view more information on The Skyscraper Center, our tall building database.

For the 10th year running, China had the most 200-meter-plus completions with 76, representing 53% of the global 2017 total. Although still the world champion by a wide margin, this is a reduction from 2016, when China had 83 completions, for 65% of that year’s total.

For the second year in a row, Shenzhen had the highest number of 200-meter-plus completions of any city in 2017 with 12 (once again, more than any country other than China managed to complete), while China’s Nanning took second place with seven completions and Chengdu tied Indonesia’s Jakarta with five. This year was remarkable in that the number of cities with at least one 200-meter building completion jumped to 69, from 54 in 2016.

Asia retained its status as the world’s skyscraper epicenter in 2017, completing 109 buildings, representing 76% of the 144-building total. This is an increase from the 105 total, but a small decline from the 83% share held in 2016.

The Middle East matched its average of 2015 and 2016 numbers with nine completions in 2017. North America more than doubled its record for 2016, with 15 completions. Europe doubled its 2016 output with four buildings of 150 meters’ or greater height. Central America had three completions for 2% of the world total, while Oceania had two completions, and Africa and South America had one each.

The functional share of tall buildings in 2017 proved to be among the most interesting discoveries in the study. Completed buildings with all-office functions fell to 56, or 39% of the total, compared to 67, or 52% of completions in 2016. Meanwhile, buildings with all-residential functions spiked to 49, or 34% of the total, from just 19, or 15% of the total in 2016. The proportion of tall buildings 200 meters and higher with mixed functions was reduced to 26% from 30% in 2016, although the raw number, 38, remained the same. Continuing the trend from last year, only one all-hotel building was completed in 2017. The reasons for this are not clear. It is tempting to speculate that we are now seeing the built results of a full-blown recovery from the 2008 economic crisis, as greater confidence in single-function programs sparks a resurgence in speculative residential development. Further, there has been growing interest over the past several years in residential real-estate investment by absentee owners as a wealth management strategy. However, market dynamics vary greatly between nations and regions, so it’s likely there are other factors in the story.

Of the 144 buildings of 200 meters or greater height completed in 2017, 74, or 51%, used concrete as the main structural material; while 64, or 44% used a composite of steel and concrete. The significant use of concrete can be attributed to a combination of concrete’s relative ubiquity and lower cost in many regions, as well as its comparative simplicity in construction, which would increase its appeal in regions with lower-skilled labor pools. In 2017, two buildings had all-steel construction, consistent with the 2016 figure. As of this writing, there were only seventeen 200-meter-plus buildings currently under construction that employed all-steel structural systems. Of course, it needs to be remembered that concrete construction normally contains substantial amounts of steel reinforcement bar (rebar), and that “composite” construction uses differing proportions of structural steel and concrete, playing to the strengths of each under different force conditions.

The distribution of the World’s 100 Tallest buildings broadly reflects that of the wider set of 200 meter-plus buildings worldwide. Asia leads with 54, followed by the Middle East with 26, North America with 15, and Europe with four.

Mixed-use functions continue to dominate the functional mix of the tallest 100 buildings, with 46 buildings, an increase from 41 in 2016. Meanwhile, office functions take a slightly lower share in 2017, with 38 buildings, down from 40 in 2016 and equal to the 2015 figure. Residential and hotel functions have shrunk as a proportion once again, with 11 and five buildings, respectively, down from 12 and seven in 2016.

The 100 Tallest list continues to be dominated by composite construction, with 51 buildings employing composite systems, equal to the 2016 numbers. All-concrete buildings decreased by one to 34 from 35 in 2016. Those buildings reported as being of “mixed” construction, in which distinctive sections of the buildings are predominantly steel or concrete, increased to five in 2017, from four in 2016. 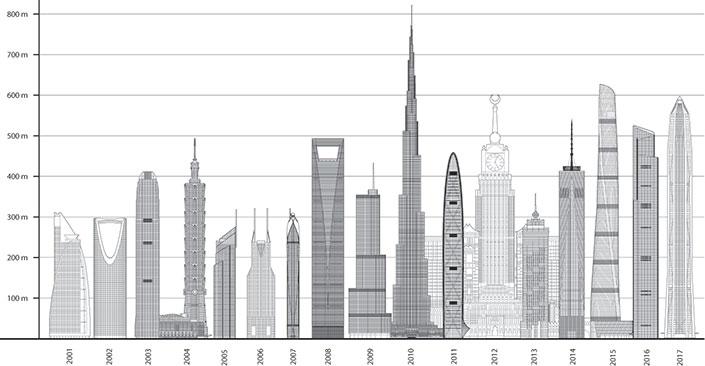 While many of the trends in the 2017 report represent continuations of those observed in previous years, one marked difference is the widening range of geographic diversity in terms of where 200-meter-and-taller buildings are located. A total of with 69 cities across 23 countries are represented in the data, up from 54 cities across 18 countries in 2016 , suggesting increasing urbanization levels around the world.

A total of 15 supertalls completed in 2017 – more than any year previous – but only 14 entered the 100 Tallest list, indicating that the threshold for being included in the 100 Tallest keeps rising (See Average Building Height).