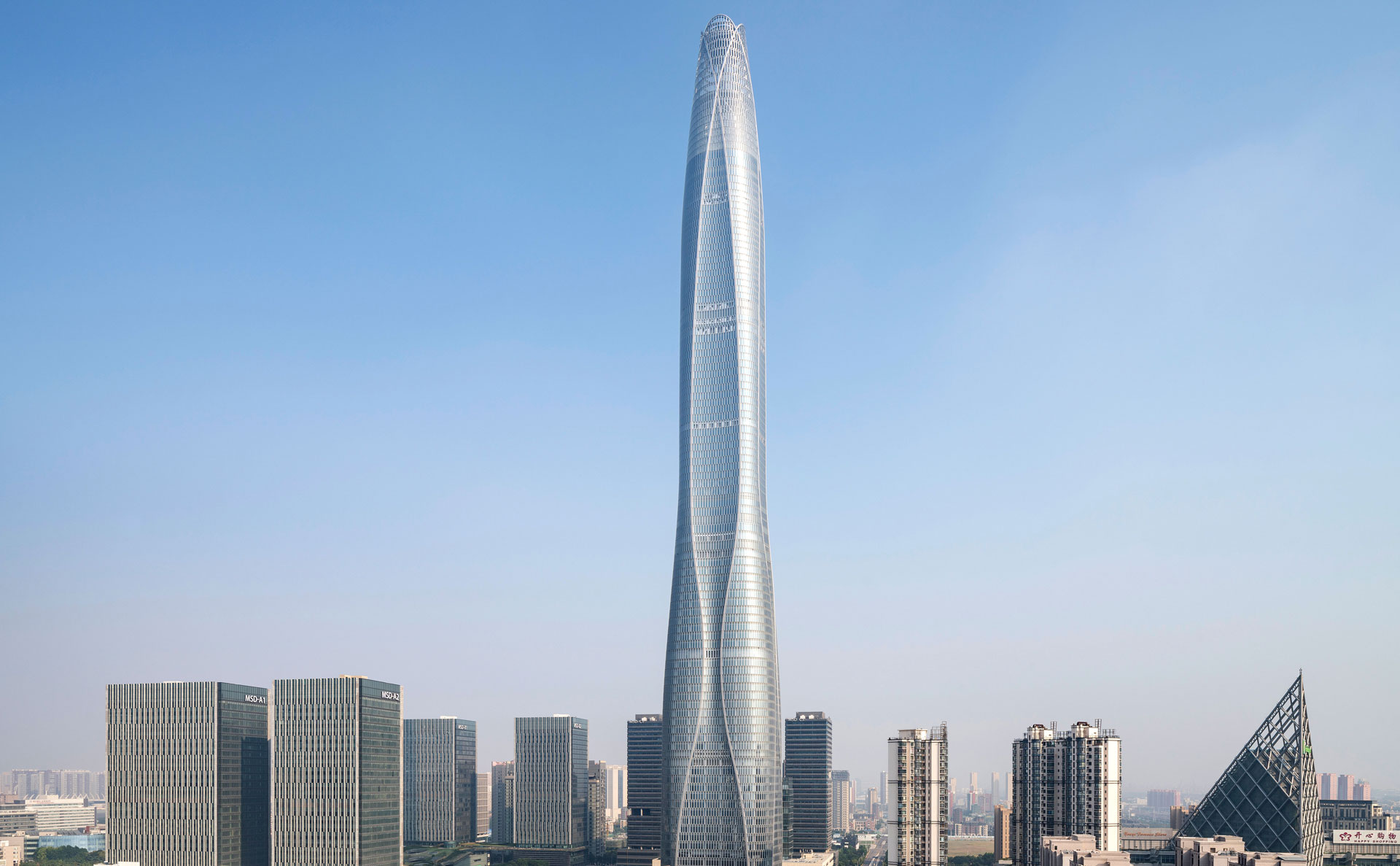 Another Record Year for Supertall Completions

The year 2019 was remarkable for the tall building industry, as it saw 26 supertall buildings (300 meters or taller) completed, the most in any year. This is the second year in which this record was established, besting 18 supertalls in 2018. It was also the sixth year in a row that at least one 500-meter-plus building was completed. Overall, 126 buildings of at least 200 meters were completed in 2019, compared to 146 in 2018, a 13.7 percent decline. This is the first year in which the overall completion figure declined since the 2010 to 2011 gap, which was attributed to the lag effect of project cancellations due to the 2008 recession. The tallest building to complete in 2019 was the Tianjin CTF Finance Centre, at 530 meters. It is now tied for the third-tallest building in China with its sister tower, Guangzhou CTF Finance Centre (also 530 meters) and is the seventh-tallest in the world. This marks the fifth year in a row in which the tallest building to complete is in China.

At the city scale, Shenzhen, China was once again the world champion, besting its own record for the fourth time in a row, with 15 completions, for 11.9 percent of the global total, surpassing all other countries besides China, let alone cities. The next-most prolific city was Dubai, with nine completions.

"Shenzhen, China was once again the world champion, besting its own record for the fourth time in a row, with 15 completions, for 11.9 percent of the global total."

In Shenzhen, the immediate forecourt of the city’s North Station saw two separate developments complete along its eastern flank. The Huide Tower and Shenzhen North Station Site C2, Tower 1, both exceeded 200 meters. The city’s Futian Station, on the same high-speed rail network that connects mainland China with Hong Kong, is already a high-rise nexus (the Ping An Finance Center complex and many others are connected to the station), but the more northerly station has both more rail capacity and buildable land, so it was only a matter of time.

In New York City, Pennsylvania Station is a well-established transit hub, but the rail yards extending westwards from its throat were long considered unbuildable. In the past decade, that perception has been wiped away, as the rail yards were decked over, and Hudson Yards and Manhattan West have opened building after building. This year’s completion roster includes One Manhattan West, and 15, 30 and 35 Hudson Yards, all over 200 meters.

Tokyo’s Shibuya Station is world-famous for the crosswalk just outside its doors, in which hordes of commuters cross the intersection in six directions, in a daily movement that seems at once choreographed and chaotic. It’s known as the “Shibuya Scramble,” and now a 228-meter office and retail tower, Shibuya Scramble Square, presides over the intersection. It is part of a substantial redevelopment of the station and surrounding district, which will see many new towers but also fewer pedestrian obstacles and awkward level changes. 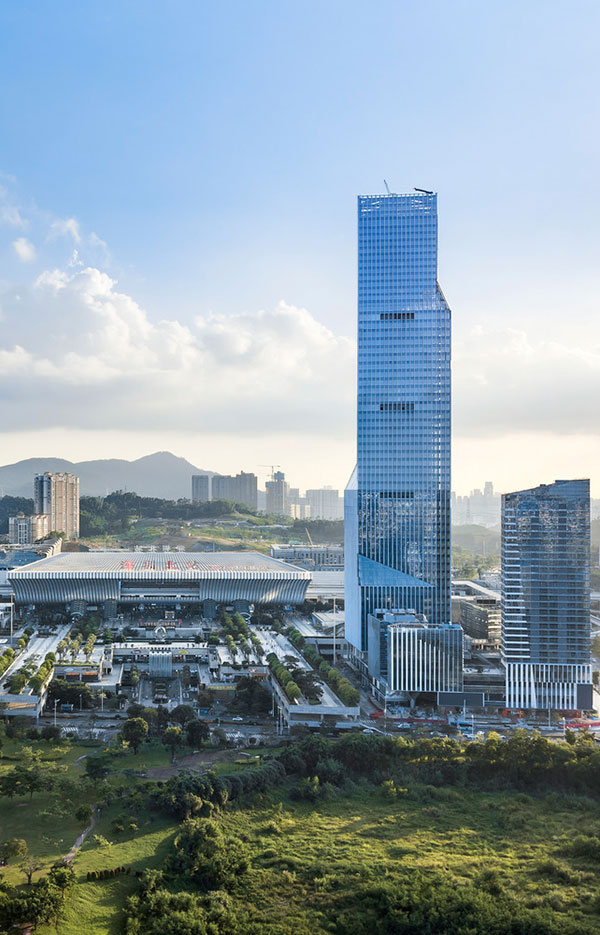 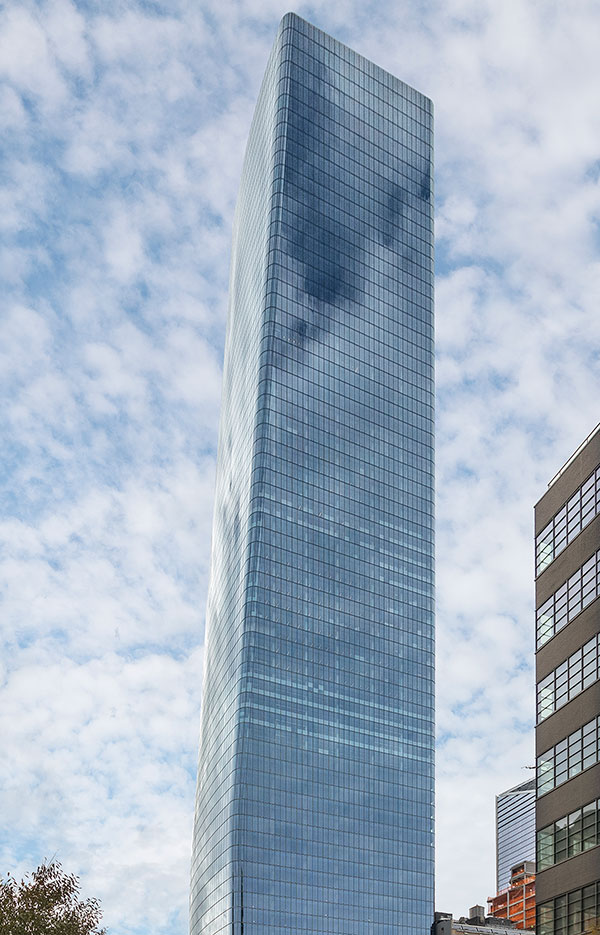 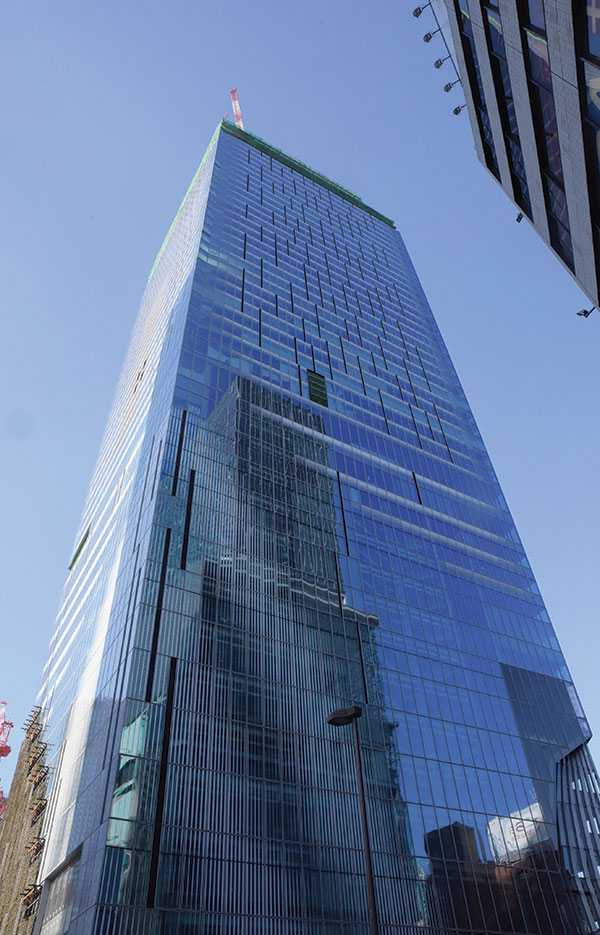 Projects coming to fruition in 2019 indicate the growing interest of creating horizontal habitat at height in increasingly crowded, vertical cities. Such skybridges are the topic of an 18-month CTBUH Research Project, currently underway.

Raffles City Chongqing, a massive, eight-tower project at the point where the Yangtze and Jialing rivers converge, substantially opened in September. The Conservatory, a 296-meter-long enclosed, curving skybridge, spans across the roofs of four towers and connects via shorter bridges to two more. Within is a huge array of programs, including a pool, gardens, restaurants, a gym, and observation areas.

Sky Suites @ KLCC, Kuala Lumpur, connects three residential towers along the tops of the towers by a curving, three-level skybridge, with a significant outdoor terrace on its roof. At its midpoint, an elevated pavilion rises, containing a gym and dance studio. Further amenities include a health spa, steam sauna, pool, restaurants, cafés and bars and planted lounging areas.

Golden Eagle Tiandi in Nanjing connects three towers, providing hotel and office functions with a multi-story skybridge. The linkage has a domed roof and offers communal space in the form of a rooftop garden lounge. Providing a connection of this nature at height is an impressive feat in a seismic zone, requiring a great deal of research on the structures’ performance under wind loads and earthquakes. 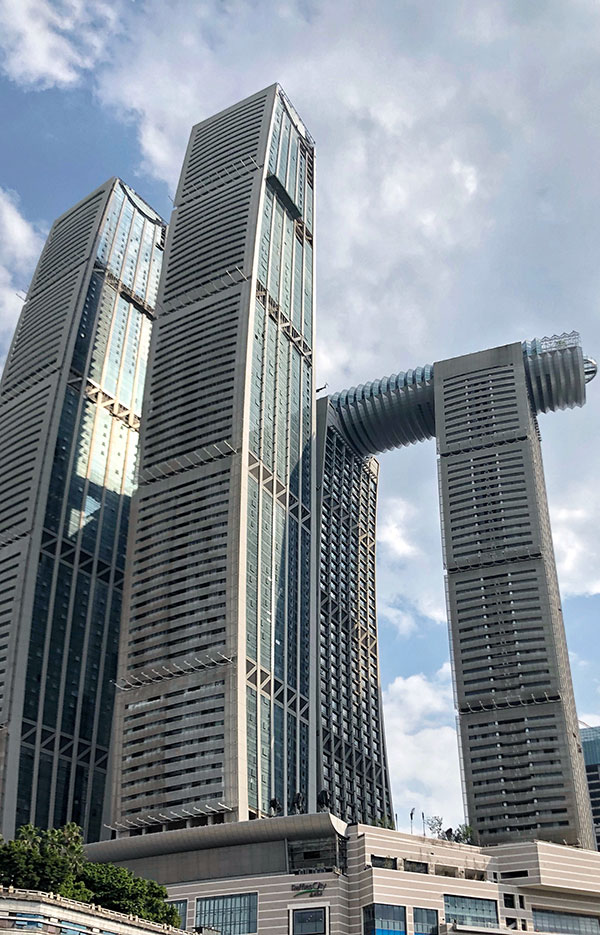 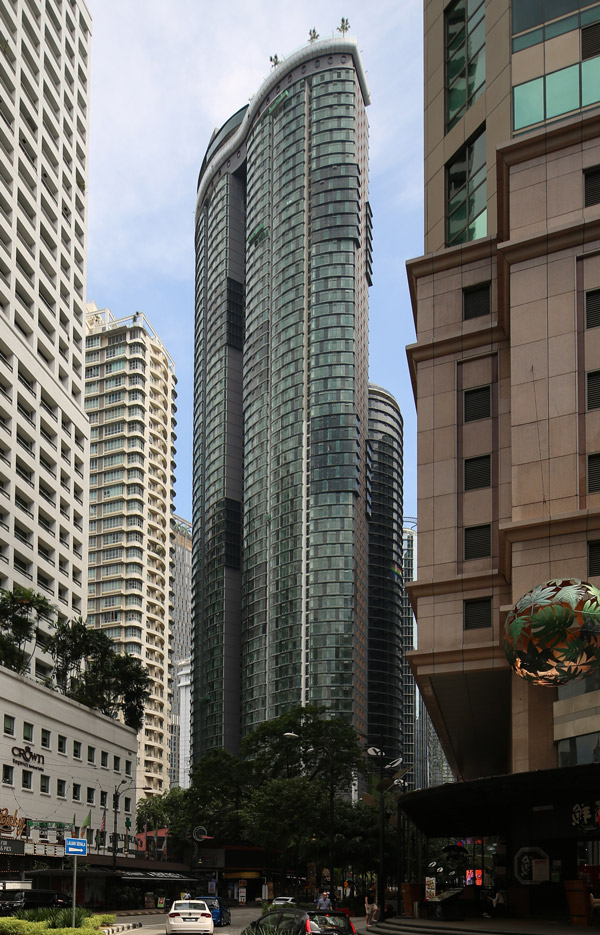 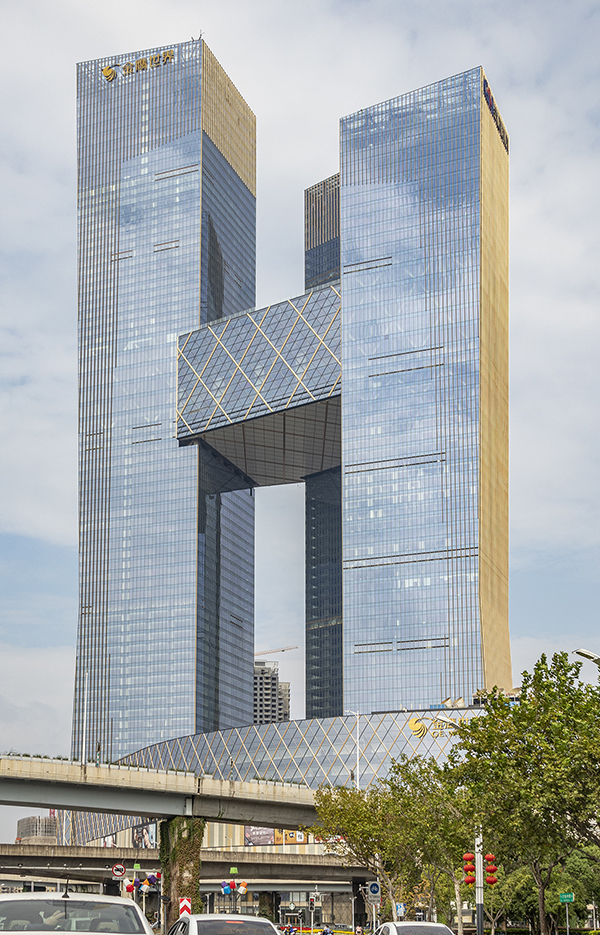 The 20 Tallest Buildings Completed in 2019

Click any building to see details or visit its profile on the Skyscraper Center.

In every year, numerous localities typically will see the rise of a new tallest building. But in 2019, it was notable that many of these were areas that did not already have a preponderance of tall buildings, and in some cases, had never been on the 200-meter-plus list before.

The African continent and the nation of Algeria alike got a new tallest building in 2019: the Great Mosque of Algiers (265 meters). Humans have used ecclesiastical structures to gain height for hundreds, if not thousands of years, but as the Great Mosque contains occupiable floors along more than 51 percent of its height, it meets the CTBUH criteria for a “building.”

On the opposite end of Africa, The Leonardo (227 meters) a hotel and apartment tower in Sandton, metropolitan Johannesburg, South Africa, became that nation’s new tallest building and the second-tallest building on the continent.

After a long gestation period including a change of site, the Lakhta Center in St. Petersburg became Russia’s and Europe’s new tallest building at 462 meters. It is also the world’s 13th-tallest building.

In Brazil, despite being a nation of many tall buildings, to date, none had exceeded 200 meters until 2019. That honor goes to the Infinity Coast Tower (235 meters) in Balneario Camboriu, a beach resort city.

In addition to striking a distinctive profile, with one balcony-laden tower appearing to lean on the other, Altair, Colombo, is Sri Lanka’s new tallest building at 240 meters.

"The African continent and the nation of Algeria alike got a new tallest building in 2019: the Great Mosque of Algiers (265 meters)."

Below is a selection of buildings completed in 2019, each of which was the tallest in its country. 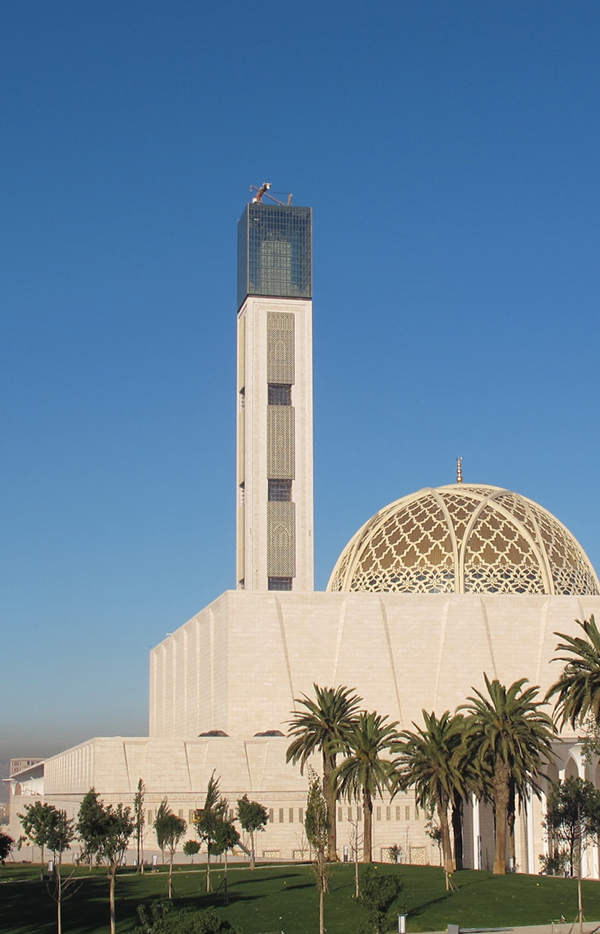 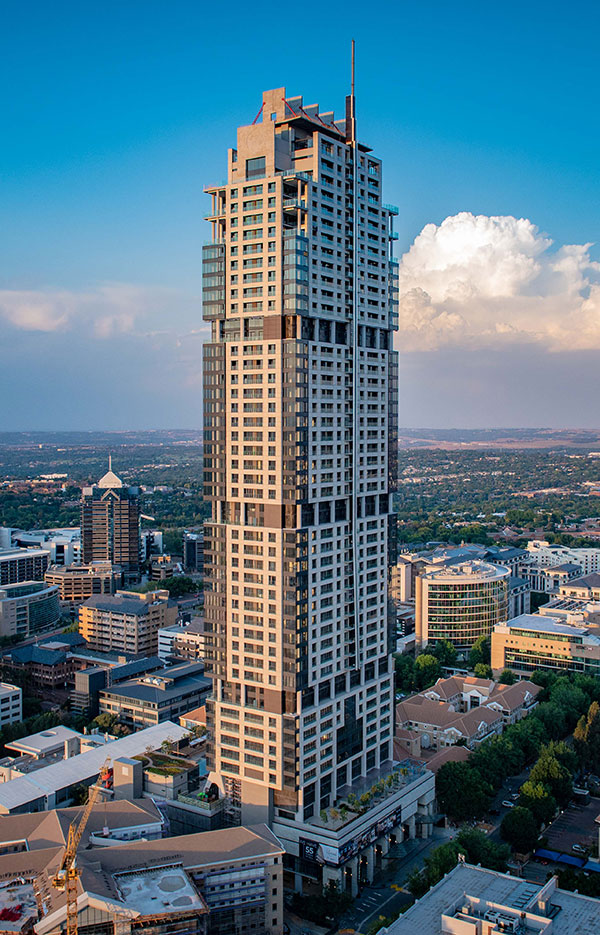 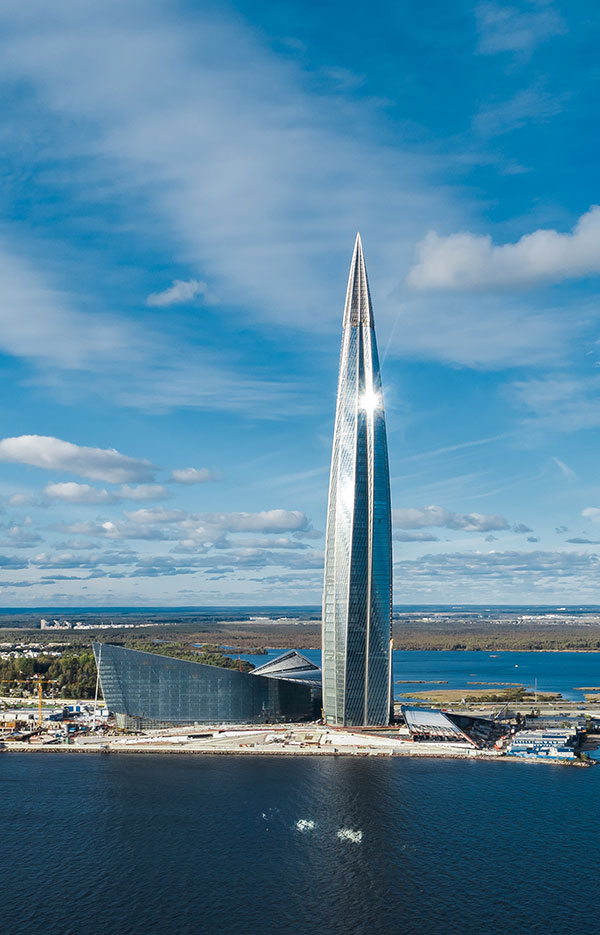 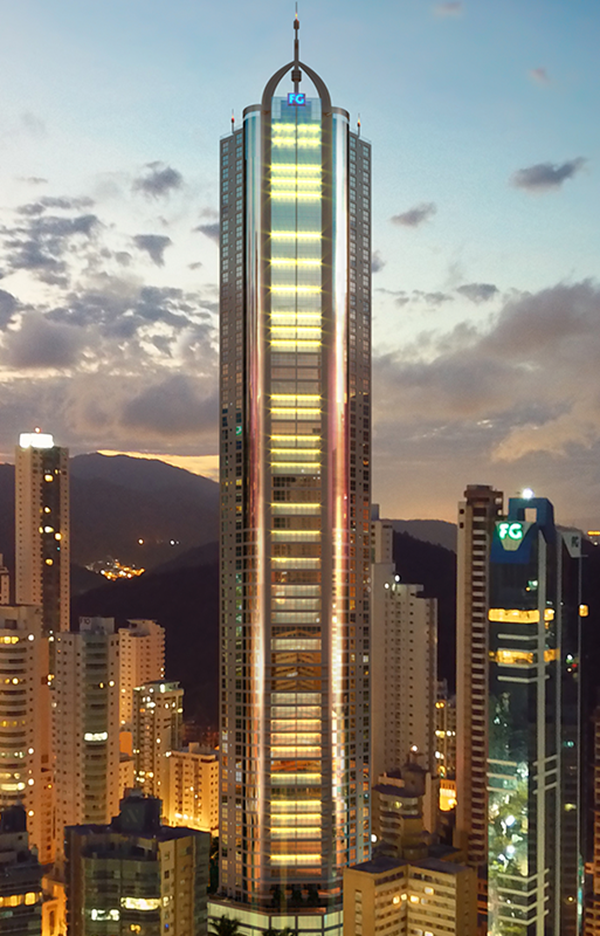 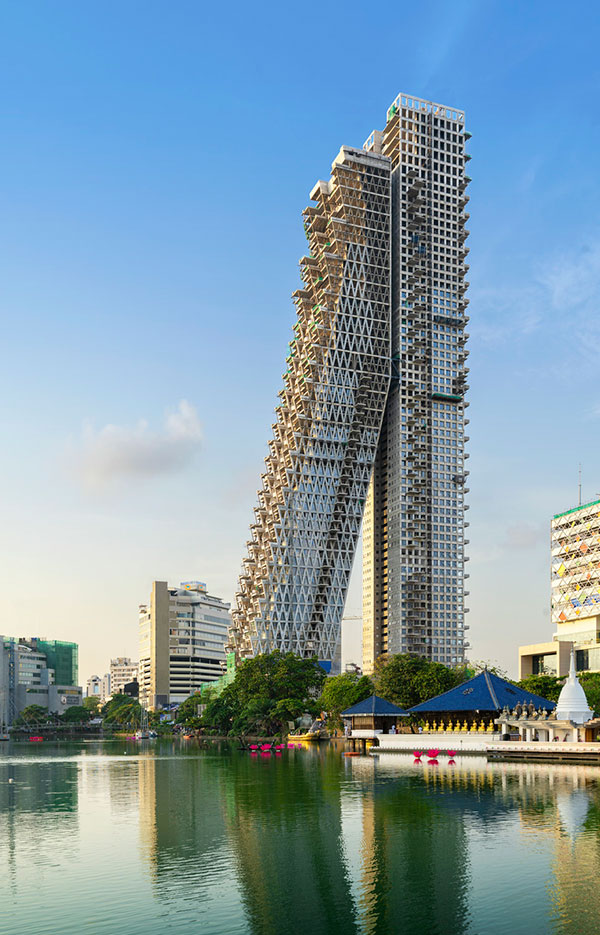 Leeza SOHO, an office tower in a new financial district on Beijing’s southwest side, capitalized on an awkward site, split in two at the foundation level by a curving subway tunnel, by turning the dividing line into a unifying concept: a building “split in two” by a towering, 190-meter atrium, running its full height.

Located in the Tianjin Economic-Technological Development Area west of the city center, the mixed-use Tianjin CTF Finance Centre tower is an anchor for the larger development. Its curvaceous form results from shape optimization to reduce vortex shedding and other wind effects, while its square plan with rounded corners enables unique interior designs and customization options for occupants.

Like many New York skyscrapers, 53West53’s shape results from the city’s zoning and setback requirements. Unlike most others, its resolution of these requirements involves tapering to a sharp edge, as it is irregular in plan and falls in three different zoning districts, each with different floor area and massing limits. Its lower floors incorporate an extension of the Museum of Modern Art (MoMA). 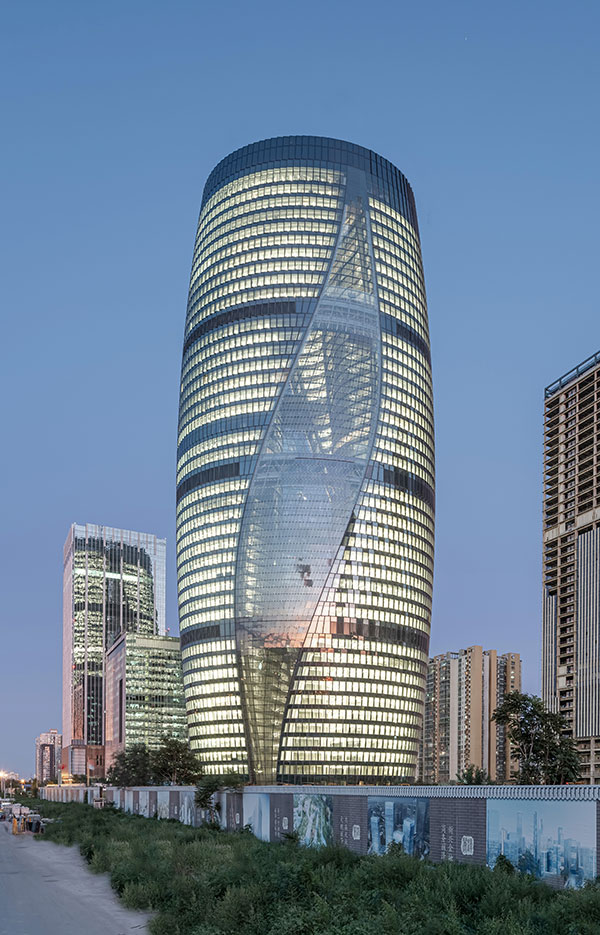 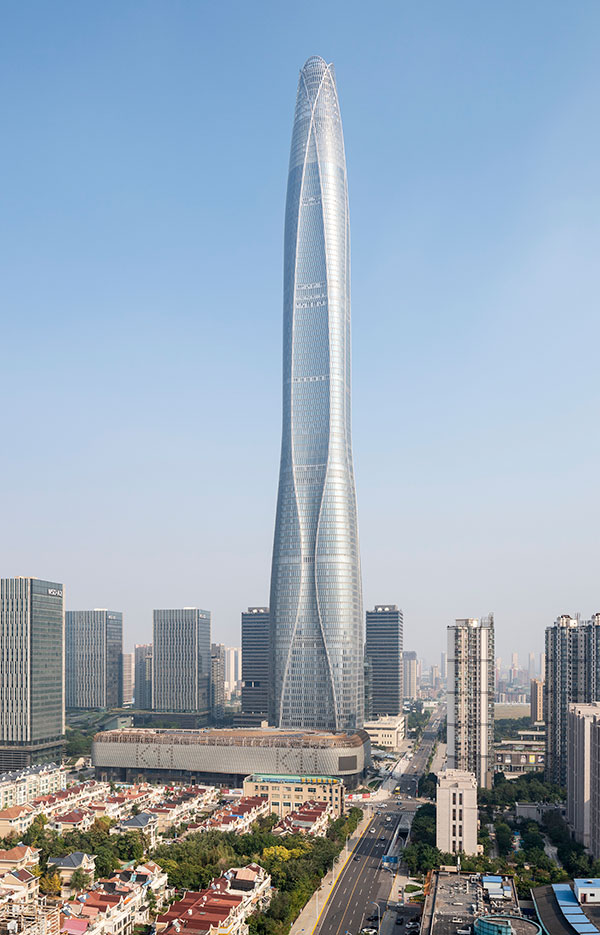 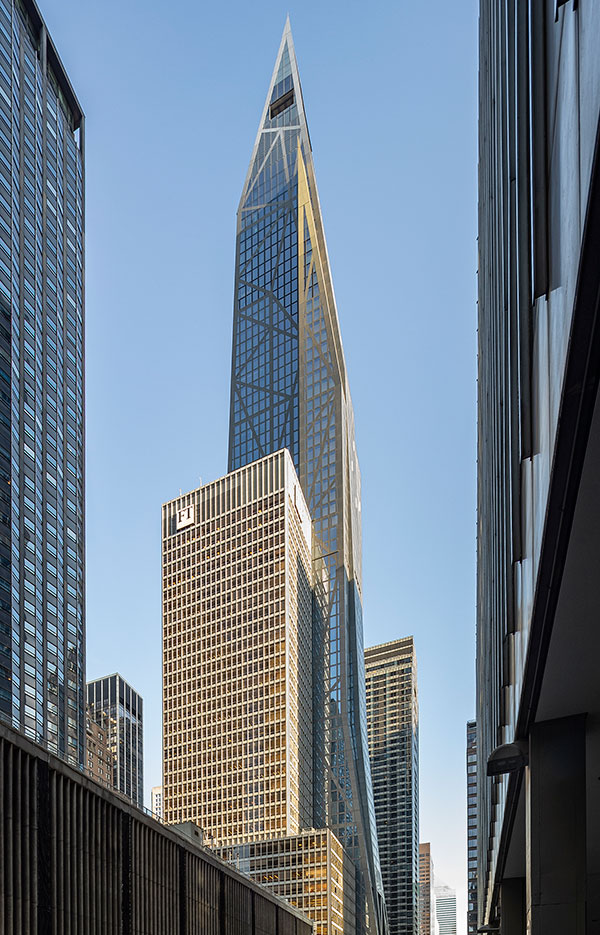 It is tempting to read the noticeable drop in completions, particularly in China, as a sign of the effect of proximate events, such as the trade negotiations with the United States, or as the harbinger of a recession. It is well-documented that many of China’s tall building projects were financed with high levels of debt, and that in recent years the government has attempted to rein in speculative building and investing. Certainly, the overall momentum of construction on the very tallest buildings in the world’s most populous nation appears to have slowed on a year-to-year basis. However, as always, it must be remembered that skyscrapers are lagging economic indicators - many of these towers were conceived and initiated five or more years ago, and thus reflect the development circumstances of a half-decade prior. Also, observed on a city-by-city basis, the data often tells a more complex, and divergent story. For instance, amidst an apparent national slowdown, Shenzhen completed more 200-meter-plus buildings than ever before, and more than any other country. Likewise, evaluations of individual cities’ progress should be discounted by the knowledge that single-developer projects completing at once may include up to eight towers, disproportionately driving up the numbers somewhat for Chongqing, Mumbai, Xiamen, Nanjing, Busan, Kuala Lumpur, and others.

Countries such as India jumped from zero 200-meter-plus completions in 2018 to tying for third place in 2019, with seven. Even this number underrepresents the volume of activity; many more Indian projects in the 200-meter-plus range have started and are well underway, but have not yet met CTBUH completion criteria. Meanwhile, countries that had never broken the 200-meter mark, like Brazil, are poking above the clouds, so to speak. And the US seems to be maintaining a steady state of development, dominated by New York, where the market for tall and thin is typically strongest; still, the nation’s total this year also incorporates some outliers such as Boston and Austin, which may reflect sharpening desire for dense urban living in smaller markets.

Further, the appetite for especially tall buildings remains high, with more supertalls (300 meters and higher) completing than ever before, and the number of buildings 500 meters and taller remains about the same – 2019 was the sixth year in a row in which at least one such building was completed.

Looking into 2020, CTBUH currently projects a similar range for the expected number of completions for 200-meter-plus buildings: between 115 and 145. Of these, between 17 and 30 are expected to be supertalls (300 meters and higher). A few snapshots of where the numbers might skew geographically: The Shengjing Finance Plaza in Shenyang, China, has 15 buildings in the complex, three of which completed in 2018, and the remainder are under construction and set to complete in 2020 – all but one exceeds 200 meters. In the Middle East, the King Abdullah Financial District in Riyadh, Saudi Arabia, is expected to substantially complete, which could release up to five 200-meter-plus buildings (of which two are supertalls) into the statistics. In North America, New York City has 10 buildings 200 meters and higher likely to finish in 2020, two of which are supertalls.