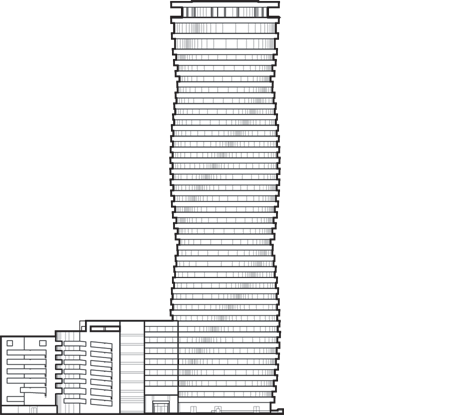 The Point takes the opportunity presented by its prominent place in the skyline to experiment with the traditional skyscraper form, by undulating as a sculpture, stepping out of the way of key views, while becoming a key view in and of itself.

The site of the building is significant: the confluence of the Babahayo and Daule rivers forms the Guayas River, which connects Guayaquil to the Pacific Ocean and serves as a deepwater port for Ecuador. The swirling shape of the tower is meant to represent the whirlpools that occur at the confluence. The establishment of the Point and its surrounding 130,000 square-meter Ciudad del Rio project are acknowledgements of Guayaquil’s rediscovery of its river. The Point and Ciudad del Rio were conceived as a sustainable development, in which the buildings occupy as little area as possible, freeing up space for pedestrians strolling along the riverside.

In some ways, the Point and Ciudad del Rio are capstones of a decades-long resurgence for Guayaquil, beginning in the 1990s. In an effort to regenerate the urban area, power and telephone lines were buried underground, the Guayas River promenade was restored with a new boardwalk in 2000, and a bus-rapid-transit system was implemented in 2006, making the city friendlier to business and tourism and enhancing the quality of life for citizens.

The program for the Point consists of offices on the upper 33 floors and an executive club on the two highest floors, with the ground floor dedicated to commercial use. The executive club contains amenities, such as a solarium with panoramic view, Jacuzzi, sauna, recreational area, bar/ lounge, gym and restaurant. The basic floor plan of the building is a square, with its edge rounded to generate the shape of the building through a 6-degree rotation, echoing the flowing water of the Guayas River. The rounded corners cut the necessary length of the concrete cantilevers, permitting their design to be simple and efficient, and their construction to be carried out largely by local Ecuadorian labor. Most of the materials used in the building were produced in Ecuador and/or within an 800 km radius of the project.

LEED principles guided many of the design choices, and were followed throughout the construction process. The cantilevered design affords solar shading, lowering interior temperatures. Rainwater is captured for flushing bathroom fixtures and for irrigation of the grounds, which are planted with native species. The building’s glazing consists of two panes with an air gap between, with the outer panes using thermally efficient glass. LED lighting is used throughout the interior, while exterior lighting is solar-powered.

The curving, cantilevered form has already won hearts and minds in Ecuador, where its model can be found in many stores as a souvenir of Guayaquil. It even has a nickname: "the screw.”