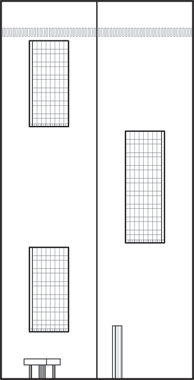 Constructed as the headquarters for the National Commercial Bank, the design was oriented around central courtyard at the center of the V-shaped office tower. The courtyard was then framed with a staggered arrangement of seven and nine story blocks of office space, allowing for large apertures for light and air to enter the courtyard, filled with a series of outdoor gardens within the center of the structure. Office floors are clad with windows facing the courtyard and solid walls of Roman travertine on the exterior, illuminating interior spaces with ambient sunlight, but eliminating heat gain from direct solar exposure. The courtyard begins just above the banking hall on the ground floor and rises through an opening in the roof, drawing heat naturally through the top of the building as air rises when heated throughout the day.

The southwestern façade of the triangular office tower is joined by a recliner spine, also clad entirely of travertine, which houses all building services and vertical transportation systems, allowing for the offices flanking the courtyard to have large uninterrupted floor pates. The National Commercial Bank is positioned on a large waterfront plaza and is flanked by a cylindrical six story parking garage constructed out of reinforced concrete. When the building opened in 1983, it was the tallest building in Jeddah and made a dramatic visual impact on what at the time was largely low-rise cityscape.