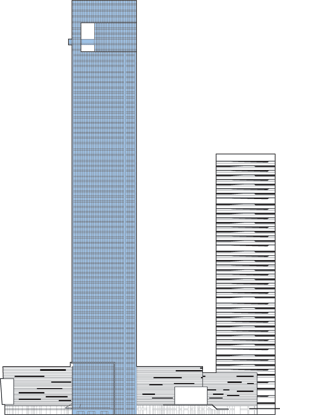 Located in the ancient port city of Xiamen, the Xiamen Cross Strait Financial Centre seeks to anchor economic development in a city that has been recently overshadowed by its proximity to Taiwan. The building is located on the western side of Xiamen Island in the Siming District. As part of the Lujiang Subdistrict, it is surrounded by a series of buildings dedicated to advancing economic development in the city, including the Xiamen Customs Centre and the Xiamen Fortune Centre.

Mullions accentuate the building’s verticality as it rises. For the majority of its height, the building is curved outward on its northwest and southeast elevations. As it reaches its pinnacle, an aperture disrupts the outwardly curved façade, which then curves inward along the building’s final stories. This interplay between convex and concave forms imparts a sense of dynamism and tension. The gap in the building runs through the northwest and southeast elevations, where a traversable ledge extends beyond the exterior wall for unparalleled views of the strait and mainland China.

The building incorporates a number of crucial safety elements, including five refuge floors and a helipad on the roof that can be used for rescue in case of emergencies. It rises out of an “L”-shaped podium that also anchors a smaller tower in the development. The podium will house various retail and commercial enterprises as well as an expansive green roof. The undulating street relationship of the podium supports a series of convenient entrances to the complex. When completed, not only will the tower be the tallest in Xiamen, but it will also serve as a new cornerstone for economic development in the region.