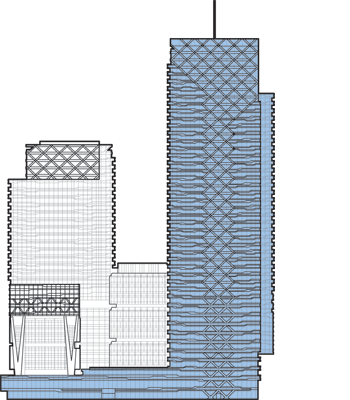 New Babylon transforms an introverted 1970s building into a 21st-century, high-rise cityscape, integrating prime work and living space and connecting occupants with an ever-growing international community. The Babylon renovation project began with a brief to extend the existing Babylon complex at The Hague’s central railway station, as part of a broader scheme to revitalize the center of The Hague.

To take maximum advantage of the building’s structural integrity while avoiding costly and undesirable demolition work, the designers incorporated the existing structure within a two-tower high-rise complex. To meet the spatial requirements of New Babylon, the usable floor space had to be tripled to 143,500 square meters, while the footprint was to increase from 7,100 square meters to 10,500 square meters.

The towers were strategically designed to take advantage of the surrounding views, while fully conforming to local height restrictions. Visible from every corner of The Hague, New Babylon is not only easily seen, but also easily reached by both private and public transport.
Effectively, New Babylon is a “recycled building” that promotes new standards for urban development. When initially designed in the 1970s, the building was modeled on a series of stacked volumes, representing the multiple functions existing in the ancient city of Babylon. This was considered cutting-edge, but by 2000, the brown interior and introverted design was out of sync with the times. New Babylon advances this concept to create new layers of form and function, creating new space for living and working in a busy city center.

The first two levels of New Babylon accommodate shops, restaurants, and other commercial premises. Wide, light-filled passageways accessible from each of the building’s four sides guide the public through the complex. Inside the building the office floors are spatially interwoven with the lower shopping levels. The upper levels house offices and a conference center that can be reached via the sky lobby on the atrium’s second level. The atrium roof makes the height of the two residential towers visible from inside the building. Several gardens on the plinth roof complement the vertical gardens in the shopping center.

The Park Tower on the northeast side and the City Tower on the southwest side contain 335 owner-occupied and rental apartments. Featuring street-level entrance halls and a concierge service, each tower provides easy access to the atrium and shopping centre. The apartments start at level 2 and range from 90 to 280 square meters in area; each apartment has its own outdoor space in the form of a balcony or roof terrace.

Given Old Babylon’s somewhat dark and sterile appearance and imposing scale, the designers wanted to introduce a human factor. To achieve this, a new, graduated façade was designed, with each step accentuating the function of the corresponding floor. An open retail plinth merges into alternating rows of offices and apartments, whose balconies blend smoothly into the composition. By demolishing the above-ground car park and replacing it with underground parking, the redevelopment has created much-needed public space that complements the addition of living space to the complex. The open character of the facades enhances the cohesion between the plinth, with its shops and arcades, and the adjoining public spaces. Thanks to these characteristics, New Babylon integrates seamlessly with the city’s spatial design, and enhances the dynamism and vitality of its immediate surroundings.