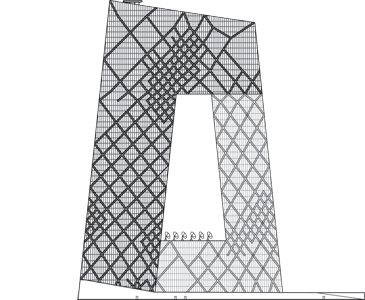 The CCTV headquarters is an unusual take on the skyscraper typology. Instead of competing in the race for ultimate height and style through a traditional two-dimensional tower soaring skyward, CCTV’s loop poses a truly three-dimensional experience, culminating in a 75-meter cantilever.

CCTV’s form facilitates the combination of the entire process of TV-making in a loop of interconnected activities. Two towers rise from a common production studio platform, the Plinth. Each tower has a different character: Tower 1 serves as editing area and offices, and the lower Tower 2 is dedicated to news broadcasting. They are joined by a cantilevering bridge for administration, the Overhang.

The main lobby, in Tower 1, is an atrium stretching three floors underground, and three floors up. It has a direct connection with Beijing’s subway network, and is the arrival and departure hub for the 10,000 workers inside CCTV headquarters. Connected to the lobby, 13 production studios (the largest is 2,000 square meters) perform the main function of the building: TV making.

The CCTV headquarters also facilitates an unprecedented degree of public access to the production of China’s media: a Public Loop takes visitors on a dedicated path through the building, revealing everyday studio work as well as the history of CCTV, and culminating at the edge of the cantilever, with spectacular views towards the CBD, the Forbidden City, and the rest of Beijing.

A Media Park forms a landscape of public entertainment, outdoor filming areas and production studios as an extension of the central green axis of the CBD.

The innovative structure of the CCTV Headquarters is the result of long-term collaboration between European and Chinese architects and engineers to achieve new possibilities for the high-rise. Early on, the team determined that the only way to deliver the desired architectural form was to engage the entire facade structure, creating in essence an external continuous tube system. The tube, which resists all of the lateral forces on the building and also carries much of the gravity force, is ideally suited to deal with the nature and intensity of permanent and temporary loading on the building.

The engineering forces at work are thus rendered visible on the façade: a web of triangulated steel tubes – diagrids – which, instead of forming a regular pattern of diamonds, become dense in areas of greater stress and looser and more open in areas requiring less support. The façade itself becomes a visual manifestation of the building's structure.

A versatile, efficient structure that bridges in bending and torsion between the Towers to create the continuous form of the Overhang section, the diagrid provides enough strength and stiffness in the Towers to carry loads to the ground. The structural system stiffens the podium and tower bases to favorably distribute loads to the foundation. It enables performance to be optimized, through adjustment of the bracing pattern, to satisfy contrasting demands of stiffness and flexibility.

The diagrid provides maximum flexibility for the bespoke planning of the interiors, since bracing is not needed within the floorplates. This allows large studio spaces to be laid out within the towers. It has enabled the Overhang section to be constructed without the need for temporary propping, since the braced skin provided stability as the steelwork was cantilevered out from the towers. This type of structure has a high degree of inherent robustness and redundancy, due to the potential for adopting alternative load paths in the unlikely event a key element’s removal.

Beijing Regional Tour Report
20-21 Sep 2014, Beijing – Tour Report
Attendees of the Beijing tour toured the new CBD development on the east side of town, projected to contain 15 towers, many of whose foundations were already visibly underway. China's Architecture Guidelines in the New Era
17 Oct 2016 – Presentation at CTBUH 2016 China Conference; Long Xiu, Architectural Society of China
This presentation endeavors to establish guidelines for a new era of architecture in China, setting forth principles on improved policy implementation to promote the&hellip;

Challenging Preconceptions of the High-Rise Typology
5 Mar 2008 – Presentation at CTBUH 2008 8th World Congress, Dubai; Ole Scheeren, OMA
Ole Scheeren from the Office of Metropolitan Architecture, presented some of the strategies utilized by OMA to challenge preconceptions of the tall building typology at&hellip; Skybridges of Significance
Aug 2020 – CTBUH Journal 2020 Issue III; CTBUH Research
Linking tall buildings with horizontal spaces, whether purely for circulation or containing programming, has been a subject of fascination for as long as tall buildings&hellip; Tall Buildings in Numbers: 50 Years of Tall Building Evolution
Oct 2019 – CTBUH Journal 2019 Issue IV; CTBUH Research
The default image of the skyscraper for the past 50 years in the public imagination has likely been the extruded, rectilinear corporate “box,” derived from the postwar&hellip;

Dynamic Interrelationship between the Evolution of the Structural Systems and Façade Design in Tall Buildings
Mar 2018 – International Journal of High-Rise Buildings Volume 7 Number 1; Kyoung Sun Moon, Yale University School of Architecture
The emergence of tall buildings in the late 19th century was possible by using new materials and separating the role of structures and that of non-structural walls from&hellip;
An Overview of Structural & Aesthetic Developments in Tall Buildings Using Exterior Bracing & Diagrid Systems
1 Dec 2016 – International Journal of High-Rise Buildings Volume 5 Number 4; Kheir Al-Kodmany, University of Illinois; Mir M. Ali, University of Illinois at Urbana-Champaign
There is much architectural and engineering literature which discusses the virtues of exterior bracing and diagrid systems in regards to sustainability - two systems&hellip; How High Could Beijing Reach?
17 Oct 2016 – Cities to Megacities: Shaping Dense Vertical Urbanism; Long Ma, Jing Huang & Cheng Hou, BIAD
Can we still save our city? How high can buildings in Beijing arise? Beijing has so many ancient buildings; can they coexist harmoniously with skyscrapers? This essay&hellip;

Challenging Preconceptions of the High-Rise Typology
Mar 2008 – CTBUH 2008 8th World Congress, Dubai; Rem Koolhaas, OMA
The skyscraper was born over 100 years ago, when the elevator made it possible to have access to previously unimaginable levels of a building. This paper examines&hellip;