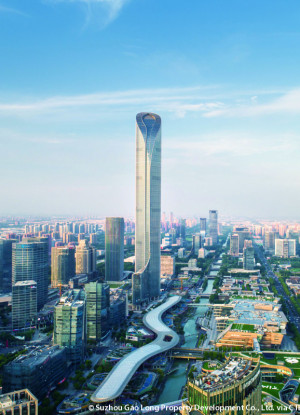 Suzhou IFS aims to be a landmark on the city’s skyline in both form and function, drawing upon modern design practices to belay the area’s historical repertoire. Conceived as a mixed-use high-rise, the tower will incorporate a number of disparate programs, embodying a modern 21st century presence that is symbolically tied to the city’s identity.

Suzhou has long been a center of trade in China, and the building’s design pays tribute to this achievement. The tower’s form is reminiscent of a fish, a symbol of prosperity and a nod to the role that water has played in the city’s history and identity—the city is surrounded by lakes and canals, causing it to become known as “Venice of the East.” As such, the tower is designed to interact with the surrounding bodies of water. The tower gestures towards Jinji Lake and opens out towards the water.

Soaring upwards, the curved “tail” of the fish subtly transitions from the scale of the lake and surrounding buildings to the top of the tower. More than an architectural embellishment, the flared base maximizes views of the water for the serviced apartments within and considerably lengthens its street frontage. At night, the tower cladding is articulated with glowing LEDs. These lights activate in a staggered timing that causes the building to shimmer in the evening skyline, much like the nearby lake.

The tower form and orientation, together with the articulation of the west façade, diminishes much of the heat and glare, while bringing more natural daylight to the internal spaces. The tower cladding is a high-performance glazing that significantly mitigates solar loading.