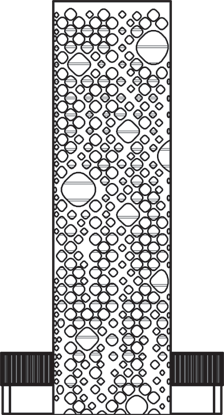 The concrete shell of O-14 provides an efficient structural exoskeleton that frees the core from the burden of lateral forces and creates highly efficient, column-free open spaces in the building’s interior. The exoskeleton of O-14 becomes the primary vertical and lateral structure for the building, allowing the column-free office slabs to span between it and the minimal core. By moving the lateral bracing for the building to the perimeter, the core, which is traditionally enlarged to receive lateral loading in most curtain wall office towers, can be minimized for only vertical loading, utilities, and transportation. Additionally, the typical curtain wall tower configuration results in floor plates that must be thickened to carry lateral loads to the core, yet in O-14 these can be minimized to only respond to span and vibration.

O-14 attempts to create a better urban condition as best it can within its limited site. Rather than assuming that the podium base would simply have an active front, O-14 subsumes the typical arcade into its shell, and produces another layer of activity higher up on the podium top. The parking is moved to four underground levels and the normally ground-level podium is elevated, thus freeing up the ground plane, and a continuous elevated pedestrian level—a “new ground”—is created above the street level. The promise is that O-14 and its neighbors could produce activity on many levels, and engender new kinds of connections from the rear street to the promenade, activating the waterfront block as a kind of infrastructure for the district.

O-14 is sheathed in a 40cm (15.7in) thick concrete shell perforated by over 1,300 openings that create a lace-like effect on the building’s façade. The shell is organized as a diagrid, the efficiency of which is wed to a system of continuous variation of openings, always maintaining a minimum structural member, adding material locally where necessary and taking away where possible. This efficiency and modulation enables the shell to create a wide range of atmospheric and visual effects in the structure without changing the basic structural form, allowing for systematic analysis and construction. As a result, the pattern design is a combination of a capillary branching field, gradients of vertical articulation, opacity, environmental effects, a structural field, and a turbulence field.

In order to create the perforated exoskeleton, O-14 uses a slip-form construction technique: modular steel concrete forms are used then moved along the building axis, preventing costly dismantling and setup of complex shapes. The holes are achieved by weaving Computer Numerically Cut (CNC) polystyrene void forms into the reinforcement matrix of the shell, around which are constructed the slip forms of the interior and exterior surfaces of the shell. Super-liquid concrete is then cast around this fine meshwork of reinforcement and void forms, resulting in the perforated exterior shell. Once the concrete has cured, the forms are loosened and moved up the tower to the next level, where the process begins again.

The shell acts not only as the primary structure of the building but also as a sunscreen open to light, air, and views. The openings on the shell thus modulate according to structural requirements, views, sun exposure, and luminosity. The overall pattern is not in response to a fixed program; rather the pattern in its modulation of solid and void will affect the arrangement of whatever program comes to occupy the floor plates. A 1m (3ft) gap between the main enclosure and exterior shell creates a so-called “chimney effect,” a phenomenon whereby hot air has room to rise and effectively cools the surface of the glass windows behind the perforated shell. This passive solar technique is a natural component of the cooling system for O-14, reducing energy consumption and costs by more than 30%.