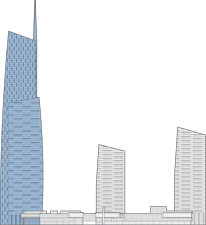 About Riverview Plaza A1

Riverview Plaza is a high-rise complex located in Wuhan, one of the major transportation and commercial hubs in China. The development consists of three towers and a podium building that is meant to become one of the city’s main attractions and economic drivers. The design of Riverview Plaza aims to celebrate Wuhan’s freshwater and commercial heritage, as well as its emergence as a political, economic, and cultural center. At 450 meters, the main tower will stand among the tallest in the city.

The design of Riverview Plaza A1 represents a contemporary interpretation of traditional Chinese architecture. Patterns on the glass are inspired by decorative window screens that are found throughout the region. While the references are traditional, the performance is modern: the curtain walls will be made from energy-efficient double glazing units that conform to the requirements of the LEED certification system. A number of other sustainable design strategies have been integrated into the building, including water-efficient toilet fixtures, LED lighting, occupancy and daylight sensors, and the use of environmentally friendly building materials. The form of the tower itself is inspired by the sampans (small, flat-bottomed boats) that once crowded the Yangtze River.

Though the tower operates on a vertical scale as a symbolic representation of the city’s heritage, it also functions practically at the human scale. The four-level podium at the base of the development will contain a convention center, movie theaters, restaurants, and a shopping mall. A four-block-long skylight will bring natural light into the interior shopping areas. On the south end of the site, a giant video screen will hovers over a public plaza, which is intended to become a gathering place on special occasions.