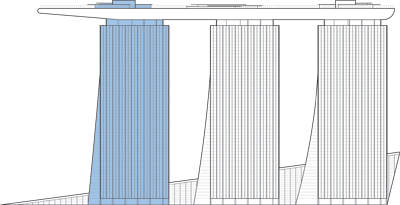 Shaping Singapore: Planning, Design and Technology Innovation
3 Nov 2016 – CTBUH "15th Annual Awards"; Dr. Cheong Koon Hean, Housing and Development Board of Singapore
Dr. Cheong Koon Hean is an architect and urban planner who has been credited with shaping much of Singapore’s urban landscape. Throughout her career, she has led the long&hellip; Cities in the Sky: Elevating Singapore's Urban Spaces
Jun 2019 – International Journal of High-Rise Buildings Volume 8 Number 2; Swinal Samant, National University of Singapore
Singapore has seen a phenomenal and an unprecedented transformation from a swampland to a high density urban environment since its independence in 1965, made possible&hellip; Conjoined Tower Structures for Mile-High Tall Buildings
Mar 2019 – International Journal of High-Rise Buildings Volume 8 Number 1; Kyoung Sun Moon, Yale University
Tall buildings are one of the most viable solutions to deal with the global phenomenon of rapid population increase and urbanization. While tall buildings are an&hellip; The Evolution of the SkyPark Since the Marina Bay Sands
Mar 2019 – International Journal of High-Rise Buildings Volume 8 Number 1; Jaron Lubin, Safdie Architects
This presentation traces the evolution of the SkyPark across multiple building types in different cities, climates and contexts from urban, architectural and social&hellip;
Ten Significant Tall Buildings, and the Significant Women Behind Them
8 Aug 2017 – CTBUH Journal, 2017 Issue III; Leading Women in Tall Buildings
Recently, there has been a growing and overdue recognition in the architecture discipline that women are under-represented, not just in terms of leadership positions held&hellip;