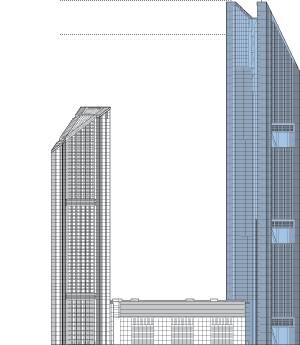 The VietinBank Business Center is an unprecedented structure for Vietnam, in both its height and cutting-edge environmental efforts. The 300,000-square-meter mixed-use project is comprised of two towers; the taller VietinBank Business Center Office Tower, at 68 stories, serves as the headquarters for one of Vietnam’s largest banking groups, VietinBank, and the shorter, 48-story tower has a luxury hotel, a spa, and serviced residences. The complex is conveniently located between central Hanoi and the airport, and marks the emergence of the city as an international financial and commercial hub.

The towers are connected by a seven-story podium, which contains a range of shops, cafés, restaurants, and carefully manicured rooftop gardens. Built on a triangular footprint, the office tower draws an interesting contour on the city skyline. The upper level of the building has been sheared diagonally to produce a dramatic V-shaped peak, which faces away from the podium adjoining the towers, to produce views of the surrounding landscape. The two wings of the towers are braced by a green column, created by a series of connected atria. A serrated façade, consisting of projecting fins that at 4.5-meter intervals, add an interesting texture to the building’s exterior. The fins also serve to provide shade, helping to maintain cooler temperatures on the tower’s interior.

The scheme employs innovative green design techniques to reduce the environmental impact of the building. A desiccant wheel diminishes the effects of the area’s humid climate by drawing in humidity, separating the water from the atmosphere and exhaling hot, dry air, which can then be cooled by ground water and released back inside. The sawtooth-patterned walls are covered by glass and solar panels. The design’s progressive environmental strategy is projected to reduce energy usage by 35 percent less than that of a typical building.