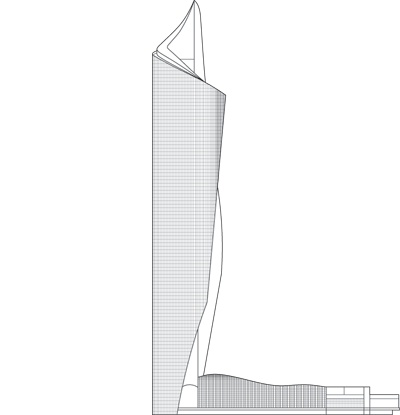 Al Hamra Tower stands as an icon symbolizing Kuwaiti national pride. The form of the building appears to be cut from a prism, a void taken from the center, with each floor plate rotating counter-clockwise around the core. The result is a spiraling geometry that unravels to the top. The void, which shifts from west to east, exposes the solid southern core wall, which is visually distinct from the other glazed and transparent walls wrapping around the rest of the building. Two solid “flared walls” provide the transition between these two conditions, covering the complex geometry of the rotating floor plates.

The southern façade, exposed through the central void, is clad in stone with angled window cuts to respond to the intense solar conditions of the area. The same material treatment is given to the flared walls that cover the curvilinear faces along the edge of the spiral void, only without window openings. The concrete construction of these elements also allows them to act as thermal mass walls, slowing heat gain during the day and releasing stored heat at night. The curved east, north, and west façades are clad in vision glass, providing clear views of the surrounding city and Kuwait Bay while also optimizing the spaces against glare and heat gain.

At the north side of the building is the main lobby, a 24-meter-high space that extends from the building core to the perimeter frame. To increase the area of the lobby, the columns along the exterior slope inwards, forming an intricate lamella structure that is both functional and elegant. At the top of the tower, a 40-meter-high space with a restaurant and observation deck provides far-reaching views of the city. To produce these unobstructed views, a cantilevered steel truss system was employed to support the roof and curtain wall glazing, reducing the necessary columns in the space. Al Hamra Firdous Tower Chosen as Featured Building
Aug 2013, Kuwait City – Featured Tall Building
The art of high-rise building design embraces, at least in part, how the observer reads the rise of the form from the earth to the sky. The Middle East: 30+ Years of Building Tall
Oct 2018 – CTBUH Journal, 2018 Issue IV; CTBUH Research
The Middle East region is hosting its first CTBUH International Conference since 2008. In that year, there were 119 completed buildings of 150 meters or greater height.&hellip;

The Middle East: 20 Years of Building Skyscrapers
Nov 2013 – CTBUH Journal, 2013 Issue IV; CTBUH Research
Twenty years ago, the Middle East contained only one skyscraper over 150 meters in height. It is now estimated that by the end of 2015 the region will have 289 buildings&hellip;

Sculpted High-rise The Al Hamra Tower
Nov 2007 – Structural Engineers World Congress 2007; Mark Sarkisian, Neville Mathias, Aaron Mazeika & et al, SOM
At 412m tall on completion, the Al Hamra Tower is set to be amongst the tallest buildings in the world. Setting it apart from other super high-rise buildings is its&hellip;